Belgravia is a district in West London in the City of Westminster and the Royal Borough of Kensington and Chelsea. It is noted for its very expensive residential properties and is one of the wealthiest districts in the world. Much of it, known as the Grosvenor Estate, is still owned by a family property company, the Duke of Westminster's Grosvenor Group. The area takes its name from one of the Duke's subsidiary titles, Viscount Belgrave. Owing to the Leasehold Reform Act 1967, the estate has been forced to sell many freeholds to its erstwhile tenants. 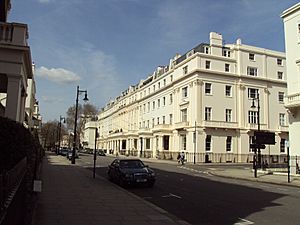 The area takes its name from one of the Duke of Westminster's subsidiary titles, Viscount Belgrave. The village of Belgrave, Cheshire is two miles (3 km) from the Grosvenor family's main country seat of Eaton Hall.

Most of the area was originally owned by Richard Grosvenor, 2nd Marquess of Westminster, who had it developed from the 1820s. Thomas Cubitt was the main contractor. Belgravia is characterised by grand terraces of white stucco houses, and is focused on Belgrave Square and Eaton Square. It was one of London's most fashionable residential districts from its beginnings. Fashion design houses that have their retail flagship stores and studios within the area include Philip Treacy, Donna Ida, Jenny Packham and HEMYCA. On the southern edge of Belgravia is Pimlico Road, renowned for its quirky antique shops and high-end furniture and interiors showrooms housing established brands such as Arthur Brett. It is a relatively quiet district in the heart of London, contrasting with neighbouring districts, which have far more busy shops, large modern office buildings, hotels and entertainment venues. Many embassies are located in the area, especially in Belgrave Square.

After the Second World War, some of the largest houses ceased to be used as residences, or townhouses for the country gentry and aristocracy, but the new uses were restricted to certain categories, including embassies, charity headquarters and professional institutions. In the early 21st century, some of these houses are being reconverted to residential use, because offices in old houses are no longer as desirable as they were in the post-war decades, while the number of super-rich in London is at a high level not seen since at least 1939. The average house price in Belgravia, as of March 2010, is £6.6 million, although many houses in Belgravia are among the most expensive anywhere in the world, costing up to £100 million, £4,671 per square foot.

As of 2013, many residential properties in Belgravia were owned by wealthy foreigners who have other luxury residences worldwide in exclusive locations or in their countries of origin; thus many Belgravia properties are unoccupied because their owners were at other properties. This phenomenon has diminished social relations in the neighbourhood. 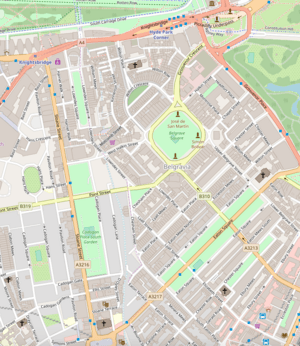 Map of Belgravia. Centre (in green) is Belgrave Square 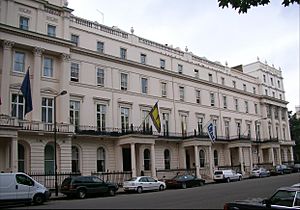 Belgrave Square, one of the grandest and largest 19th century squares, is the centrepiece of Belgravia. It was laid out by the property contractor Thomas Cubitt for the 2nd Earl Grosvenor, later to be the 1st Marquess of Westminster, in the 1820s. Most of the houses were occupied by 1840.

The original scheme consisted of four terraces, each made up of eleven grand white stuccoed houses, apart from the south-east terrace, which had twelve; detached mansions were in three of the corners and there was a private central garden. The numbering is anti-clockwise from the north: NW terrace Nos. 1 to 11; west corner mansion No. 12; SW terrace 13–23; south corner mansion No. 24; SE terrace Nos. 25–36; east corner mansion No. 37; NE terrace Nos. 38–48. There is also a slightly later detached house at the northern corner, No. 49, which was built in by Cubitt for Sidney Herbert in 1851. The terraces were designed by George Basevi and are possibly the grandest houses ever built in London on a speculative basis. The largest of the corner mansions, Seaford House in the east corner, was designed by Philip Hardwick, and the one in the west corner was designed by Robert Smirke. The square contains statues of Christopher Columbus, Simón Bolívar, José de San Martín, Prince Henry the Navigator, the 1st Marquess of Westminster, a bust of George Basevi and a sculpture entitled Homage to Leonardo, the Vitruvian Man, by Italian sculptor Enzo Plazzotta. 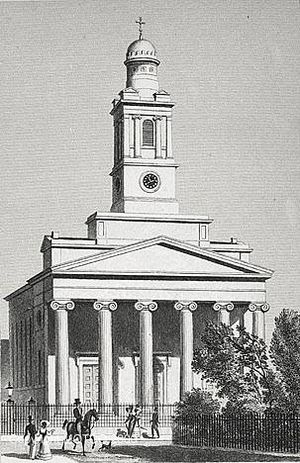 Eaton Square is one of three garden squares built by the Grosvenor family, and is named after the historic Cheshire manor of Eaton, on which is situated the country house of Eaton Hall, the Grosvenor family's principal seat. Eaton Square is larger but less grand than the central feature of the district, Belgrave Square, and both are larger and grander than Chester Square. The first block was laid out by Thomas Cubitt in 1827.

The houses in Eaton Square are large, predominantly three bay wide buildings, joined in regular terraces in a classical style, with four or five main storeys, plus attic and basement and a mews house behind. The square is one of London's largest and is divided into six compartments by the upper end of Kings Road (northeast of Sloane Square), a main road, now busy with traffic, that occupies its long axis, and two smaller cross streets. Most of the houses are faced with white stucco, but some are faced with brick.

Before the Second World War, Eaton Square was a securely upper-class address, but not of the grandeur of London's very grandest addresses in Mayfair and Belgravia: Belgrave Square, Grosvenor Square, St James's Square or Park Lane. However, after the Second World War, when those places were converted to mainly commercial and institutional use, Eaton Square remained almost wholly residential and rose to the front rank of fashionable addresses. For some years in the 1950s No. 85-87 was used as a London County Council hostel for girls, and accommodated around 150 girls from all corners of the globe. Some of the houses remain undivided, but much of the square has been converted into flats and maisonettes by the Grosvenor Estate. These are often lateral conversions, that is they cut across more than one of the original houses, and they usually cost several million pounds. The exterior appearance of the square remains as it was when it was built, with no intrusive modern buildings. Most, but not all, of the freeholds still belong to the Grosvenor Group, and the present Duke of Westminster has his own London home in the square – an illustration of the migrations of the London upper class already mentioned, as up until the 1920s his predecessors lived, when in London, at Grosvenor House a grand detached townhouse, now demolished, and now the site of the Grosvenor House Hotel in Park Lane.

At the east end of the square is St Peter's Church, a large Church of England building, in a classical style, which features a six-columned Ionic portico and a clock tower. It was designed by Henry Hakewill and built between 1824 and 1827 during the first development of Eaton Square.

Upper Belgrave Street is a wide one-way residential street graced with a series of very grand and imposing white stuccoed buildings. It stretches from the south east corner of Belgrave Square to the north east corner of Eaton Square. Particularly imposing are Nos 6, 7 and 8. They are very attractive with unrivalled views down the length of Eaton Place.

Upper Belgrave Street is an exclusive and highly desired address, home to some of the most expensive properties in the world. It has some very large houses, as large as those in Eaton Square itself. Most of the houses have now been divided into flats and achieve sale prices as high as £3,500 per square foot.

Many of the buildings were constructed by Thomas Cubitt in the 1820s and 1830s. No. 13 was built for an illegitimate child of King William IV.

No 36 at the corner of Belgrave Square and Upper Belgrave Street is used as the residence for the Belgian ambassador. 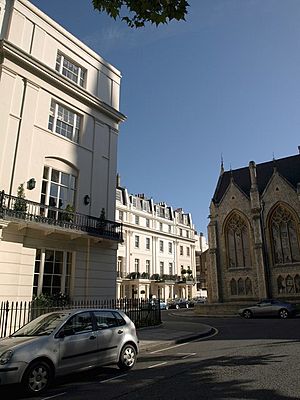 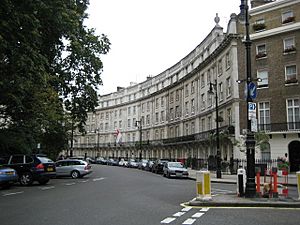 Wilton Crescent was created by Thomas Cundy II, the Grosvenor family Estate surveyor, and was drawn up with the original 1821 Wyatt plan for Belgravia. It is named after the 2nd Earl of Wilton, second son of the 1st Marquess of Westminster. The street was built in 1825 by William Howard Seth-Smith.

In the 19th and 20th centuries, it was home to many prominent British politicians, ambassadors and civil servants. Louis Mountbatten, 1st Earl Mountbatten of Burma (1900–1979) lived at 2 Wilton Crescent for many years and Alfonso López Pumarejo, twice President of Colombia ((1934-1938) and (1942-1945)), lived and died at 33 Wilton Crescent (today, there is a blue plaque on the house marking it). Like much of Belgravia, Wilton Crescent is characterised by grand terraces with lavish white houses which are built in a crescent shape, many of them with stuccoed balconies, particularly on the southern part of the crescent. The houses to the north of the crescent are stone clad, and five stories high, and were refaced between 1908 and 1912. Most of the houses had originally been built in the stucco style, but such houses became stone clad during this renovation period. Other houses today have black iron balconies.

Wilton Crescent lies east of Lowndes Square and Lowndes Street, to the northwest of Belgrave Square. It is accessed via Wilton Place which connects it to the main road in Knightsbridge. It is adjacent to Grosvenor Crescent to the east, which contains the Indonesian Embassy. Further to the east lies Buckingham Palace. The play Major Barbara is partly set at Lady Britomart's house in Wilton Crescent. In 2007, Wilton Garden, in the middle of the crescent, was awarded a bronze medal by the London Gardens Society. 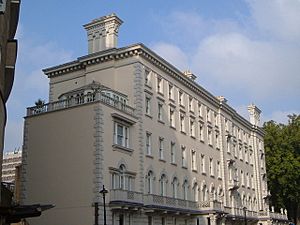 Lowndes Square, like much of Belgravia, is characterised by grand terraces with white stucco houses. To the east lies Wilton Crescent and Belgrave Square. The square runs parallel with Sloane Street to the east, east of the Harvey Nichols department-store and Knightsbridge tube station. It is home to some of the most expensive properties in the world. Russian businessman Roman Abramovich bought two stucco houses in Lowndes Square in 2008. The merged houses, with a total of eight bedrooms, are expected to be worth £150 million, which exceeds the value of the previous most expensive house in London.George Basevi designed many of the houses in the square. Mick Jagger and James Fox once filmed in Leonard Plugge's house in Lowndes Square. The square was used as a setting in the Edward Frederic Benson novel The Countess of Lowndes Square.

The nearest London Underground stations are Hyde Park Corner, Knightsbridge and Sloane Square. Victoria station, a major National Rail, tube and coach interchange, is to the east of the district. Regular bus services run to all areas of Central London from Grosvenor Place.

All content from Kiddle encyclopedia articles (including the article images and facts) can be freely used under Attribution-ShareAlike license, unless stated otherwise. Cite this article:
Belgravia Facts for Kids. Kiddle Encyclopedia.