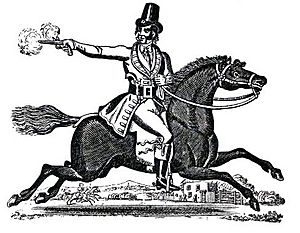 A highwayman was a type of robber who attacked people who were travelling. They were common in the British Isles from the time of Elizabeth I to the 1800s. Highwaymen rode on horses. They were thought to be socially superior to footpads (who robbed on foot).

Some highwaymen robbed alone but others worked in gangs. They often targeted coaches because they did not have much defence, They stole money, jewellery and other valuable items. The penalty for robbery with violence was execution by hanging. The 17th century highwayman James Hind was hanged, drawn and quartered. As a supporter of King Charles, the Protectorate charged him with treason.

One of the most famous highwaymen was Dick Turpin, who was hanged for his crimes in 1739. The Australian bushranger Ben Hall was said to be one too. The worst place for highwayman were Shooter’s Hill and Finchely Common. Highwayman were not only just men but woman too. The Soldiers would catch the Highwayman.

All content from Kiddle encyclopedia articles (including the article images and facts) can be freely used under Attribution-ShareAlike license, unless stated otherwise. Cite this article:
Highwayman Facts for Kids. Kiddle Encyclopedia.