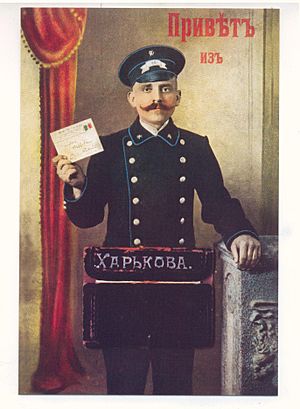 Postcard depicting a Russian Empire mailman, with an inscription in Russian "Hello from Kharkov" 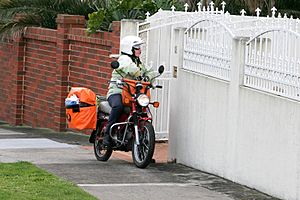 An Australian postie riding a motorbike in Melbourne. 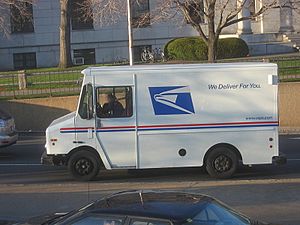 A mail carrier, mailman, mailwoman, postal carrier, postman, postwoman, or letter carrier (in American English), sometimes colloquially known as a postie (in Australia, New Zealand, Scotland, and other parts of the United Kingdom), is an employee of a post office or postal service, who delivers mail and parcel post to residences and businesses. The term "mail carrier" came to be used as a gender-neutral substitute for "mailman" soon after women began performing the job. In the Royal Mail, the official name changed from "letter carrier" to "postman" in 1883, and "postwoman" has also been used for many years.

Letter carriers are paid hourly with the potential for overtime. Letter Carriers are also subject to "pivoting" on a daily basis. Pivoting (when a carrier's assigned route will take less than 8 hours to complete, management may "pivot" said carrier to work on another route to fill that carrier up to 8 hours.) is a tool postal management uses to redistribute and eliminate overtime costs, based on consultation with the Carrier about his/her estimated workload for the day and mail volume projections from the DOIS (Delivery Operations Information System) computer program. Routes are adjusted and/ or eliminated based on information (length, time, and overall workload) also controlled by this program, consultations with the carrier assigned to the route, and a current PS Form 3999 (street observation by a postal supervisor to determine accurate times spent on actual delivery of mail). Many carriers object to the fact that average mail volumes used for route adjustments come from DOIS as it is not an actual count of the mail by a person and instead by a machine, leading carriers to question the accuracy of the count.

Rural carriers are under a form of salary called "evaluated hours", usually with overtime built into their pay. The evaluated hours are created by having all mail counted for a period of two or four weeks, and a formula used to create the set dollar amount they will be paid for each day worked until the next time the route is counted. Highway Contract Routes are awarded to the lowest bidder, and that person then either carries the route themselves or hires carriers to fulfill their contract to deliver the mail.

Letter carriers typically work urban routes that are high density and low mileage. These routes are classified as either "mounted" routes (for those that require a vehicle) or "walking" routes (for those that are done on foot). When working a mounted route, letter carriers usually drive distinctive white vans with the logo of the United States Postal Service on the side and deliver to curbside and building affixed mailboxes. Carriers who walk generally also drive postal vehicles to their routes, park at a specified location, and carry one "loop" of mail, up one side of the street and back down the other side, until they are back to their vehicle. This method of delivery is referred to as "park and loop". Letter carriers may also accommodate alternate delivery points in cases where "extreme physical hardship" is confirmed.

Rural carriers typically work routes that have a lower density and higher mileage than those of letter carriers. They all work mounted routes, leaving their vehicles only to deliver to group mailboxes or to deliver an article that must be taken to a customer's door. However, now that former rural areas are being urbanized, their routes are growing very similar to mounted "city routes". Rural carriers often use their own vehicles and are not required to wear a uniform. Because of urbanization around cities and because rural carriers deliver mail at less cost to the Postal Service, the rural carrier craft is the only craft in the Postal Service which is growing.

Highway Contract Route carriers work routes that were established with a density of less than one customer per mile driven (some later grow denser, and can then be converted to rural delivery). They are only mounted routes, and all HCR carriers use their own vehicle. These routes are typically found in outlying areas, or around very small communities.

The three types of mail carriers are also hired quite differently. A new letter carrier begins as a City Carrier Assistant (CCA.) Rural carriers are hired as Rural Carrier Associate (RCA) carriers, without benefits. There is normally an RCA assigned to each rural route, so they usually work less frequently than city CCAs. As a result, there are thousands of RCA positions that go unfilled due to a lack of applicants, and are being covered by other RCA's until hiring improves for the hiring process explained). Highway Contract Route carriers are hired by the winning bidder for that route. They are not United States Postal Service employees, and normally receive lower pay than carriers on city or rural routes.

Women have been transporting mail in the United States since the late 1800s.

The first women city carriers were appointed in World War I and by 2007, about 59,700 women served as city carriers and 36,600 as rural carriers representing 40% of the carrier force.

All content from Kiddle encyclopedia articles (including the article images and facts) can be freely used under Attribution-ShareAlike license, unless stated otherwise. Cite this article:
Mail carrier Facts for Kids. Kiddle Encyclopedia.