Postal systems often do things other than sending letters. In some countries, the postal system is also in charge of telephone and telegraph systems. The postal systems in other countries can help people apply for government papers such as passports and driver's licenses. Many places the post offices also work like banks. This is so that people can take out money or pay bills at a nearby post office, instead of travelling to a big bank in the nearest town. 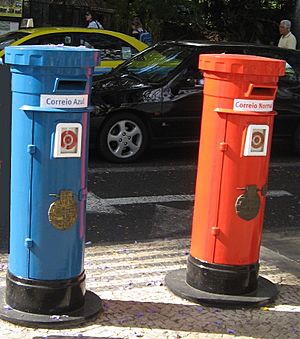 Pillar boxes on the island of Madeira, Portugal. (1st class mail in blue and 2nd class in red)

Letter-sized mail constitutes the bulk of the contents sent through most postal services. These are usually documents printed on A4 (210×297 mm), Letter-sized (8.5×11 inches), or smaller paper and placed in envelopes.

Handwritten correspondence, while once a major means of communications between distant people, is now used less frequently due to the advent of more immediate means of communication, such as the telephone or e-mail. Traditional letters, however, are often considered to harken back to a "simpler time" and are still used when someone wishes to be deliberate and thoughtful about his or her communication. An example would be a letter of sympathy to a bereaved person.

Bills and invoices are often sent through the mail, like regular billing correspondence from utility companies and other service providers. These letters often contain a self-addressed envelope that allows the receiver to remit payment back to the company easily. While still very common, many people now opt to use online bill payment services, which eliminate the need to receive bills through the mail. Paperwork for the confirmation of large financial transactions is often sent through the mail. Many tax documents are as well.

New credit cards and their corresponding personal identification numbers are sent to their owners through the mail. The card and number are usually mailed separately several days or weeks apart for security reasons.

Bulk mail is mail that is prepared for bulk mailing, often by presorting, and processing at reduced rates. It is often used in direct marketing and other advertising mail, although it has other uses as well. The senders of these messages sometimes purchase lists of addresses (which are sometimes targeted towards certain demographics) and then send letters advertising their product or service to all recipients. Other times, commercial solicitations are sent by local companies advertising local products, like a restaurant delivery service advertising to their delivery area or a retail store sending their weekly advertising circular to a general area. Bulk mail is also often sent to companies' existing subscriber bases, advertising new products or services.

First-Class Mail in the U.S. includes postcards, letters, large envelopes (flats), and small packages, providing each piece weighs 13 ounces or less. Delivery is given priority over second-class (newspapers and magazines), third class (bulk advertisements), and fourth-class mail (books and media packages). First-Class Mail prices are based on both the shape and weight of the item being mailed. Pieces over 13 ounces can be sent as Priority Mail. As of 2011 42% of First-Class Mail arrived the next day, 27% in two days, and 31% in three. The USPS expected that changes to the service in 2012 would cause about 51% to arrive in two days and most of the rest in three.

The British Royal Mail equivalent to USPS First-Class Mail is stylized as 1st Class, and is simply a priority option over 2nd Class, at a slightly higher cost. Royal Mail aims (but does not guarantee) to deliver all 1st Class letters the day after postage. 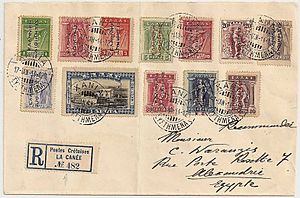 Registered mail allows the location and in particular the correct delivery of a letter to be tracked. It is usually considerably more expensive than regular mail, and is typically used for valuable items. Registered mail is constantly tracked through the system.

Recorded mail is handled just like ordinary mail with the exception that it has to be signed for on receipt. This is useful for legal documents where proof of delivery is required.

In the United Kingdom recorded delivery mail (branded as signed for by the Royal Mail) is covered by The Recorded Delivery Services Act 1962. Under this legislation any document which its relevant law requires service by registered post can also be lawfully served by recorded delivery. This act states that any recorded delivery item is deemed to have been delivered at the instant it is posted if; (a) the item is delivered and signed for at the delivery address or handed over and signed for the at local sorting office (see (c)); (b) delivery is refused by any person occupying the address or (c) if the item is not collected from the sorting office within seven days following a non delivery because there is no reply to the postman and he leaves a collection card. The sorting office will return the item to the sender after the seventh day. The sender should retain the item unopened as proof that the item has been delivered (at least in law if not in fact). Although much case law has attempted to undermine the provisions of the Act, it has done little but reinforce the point.

Postal cards and postcards are small message cards which are sent by mail unenveloped; the distinction often, though not invariably and reliably, drawn between them is that "postal cards" are issued by the postal authority or entity with the "postal indicia" (or "stamp") preprinted on them, while postcards are privately issued and require affixing an adhesive stamp (though there have been some cases of a postal authority's issuing non-stamped postcards). Postcards are often printed to promote tourism, with pictures of resorts, tourist attractions or humorous messages on the front and allowing for a short message from the sender to be written on the back. The postage required for postcards is generally less than postage required for standard letters; however, certain technicalities such as their being oversized or having cut-outs, may result in payment of the first-class rate being required.

Postcards are also used by magazines for new subscriptions. Inside many magazines are postage-paid subscription cards that a reader can fill out and mail back to the publishing company to be billed for a subscription to the magazine. In this fashion, magazines also use postcards for other purposes, including reader surveys, contests or information requests.

Postcards are sometimes sent by charities to their members with a message to be signed and sent to a politician (e.g. to promote fair trade or third world debt cancellation). 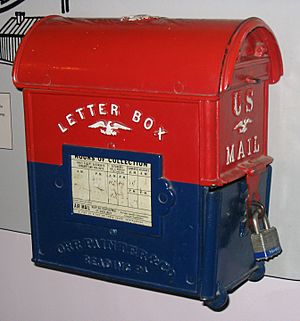 This antique "letter-box" style U.S. mailbox is both on display and in use at the Smithsonian Institution Building.

Packages are often sent through some postal services, usually requiring additional postage than an average letter or postcard. Many postal services have limitations as to what a package may or may not contain, usually placing limits or bans on perishable, hazardous or flammable materials. Some hazardous materials in limited quantities may be shipped with appropriate markings and packaging, like an ORM-D label. Additionally, as a result of terrorism concerns, the U.S. Postal Service subjects their packages to numerous security tests, often scanning or x-raying packages for materials that might be found in biological materials or mail bombs.

Newspapers and magazines are also sent through postal services. Many magazines are simply placed in the mail normally (but in the U.S., they are printed with a special bar code that acts as pre-paid postage - see POSTNET), but many are now shipped in shrinkwrap to protect the loose contents of the magazine. During the second half of the 19th century and the first half of the 20th century, newspapers and magazines were normally posted using wrappers with a stamp imprint.

Hybrid mail, sometimes referred to as L-mail, is the electronic lodgement of mail from the mail generator’s computer directly to a Postal Service provider. The Postal Service provider is then able to use electronic means to have the mail piece sorted, routed and physically produced at a site closest to the delivery point. It is a type of mail growing in popularity with some Post Office operations and individual businesses venturing into this market. In some countries, these services are available to print and deliver emails to those who are unable to receive email, such as the elderly or infirm. Services provided by Hybrid mail providers are closely related to that of mail forwarding service providers. 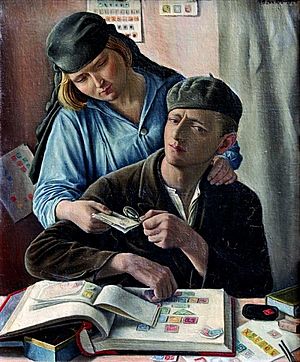 Postage stamps are also object of a particular form of collecting. Stamp collecting has been a very popular hobby. In some cases, when demand greatly exceeds supply, their commercial value on this specific market may become enormously greater than face value, even after use. For some postal services the sale of stamps to collectors who will never use them is a significant source of revenue; for example, stamps from Tokelau, South Georgia & South Sandwich Islands, Tristan da Cunha, Niuafo´ou and many others. Stamp collecting is commonly known as philately, although strictly the latter term refers to the study of stamps.

Another form of collecting regards postcards, a document written on a single robust sheet of paper, usually decorated with photographic pictures or artistic drawings on one of the sides, and short messages on a small part of the other side, that also contained the space for the address. In strict philatelic usage, the postcard is to be distinguished from the postal card, which has a pre-printed postage on the card. The fact that this communication is visible by other than the receiver often causes the messages to be written in jargon.

Letters are often studied as an example of literature, and also in biography in the case of a famous person. A portion of the New Testament of the Bible is composed of the Apostle Paul's epistles to Christian congregations in various parts of the Roman Empire. See below for a list of famous letters.

A style of writing, called epistolary, tells a fictional story in the form of the correspondence between two or more characters.

A makeshift mail method after stranding on a deserted island is a message in a bottle.

All content from Kiddle encyclopedia articles (including the article images and facts) can be freely used under Attribution-ShareAlike license, unless stated otherwise. Cite this article:
Mail Facts for Kids. Kiddle Encyclopedia.