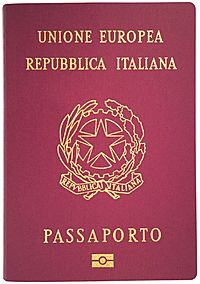 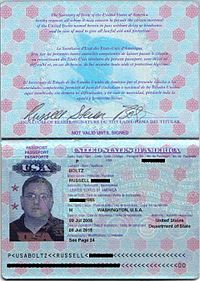 The inside of a United States passport

A passport is a travel document that says that the person who owns it is a citizen of the country on the passport. A passport asks that the person carrying it be allowed to enter and pass through other countries. They also allow a person to re-enter their country. Passports are given by national governments.

Passports usually have a person's picture, signature, date of birth, nationality and country of birth. Many countries are now issuing passports with biometric properties. This helps confirm that the person carrying a passport is the real owner. These countries have passports that use biometrics: Malaysia, Australia, Greece, Israel, New Zealand, Japan, Portugal, Sweden, the United Kingdom, the United States, Germany, Ireland, Poland, Italy, Slovenia, Singapore, Thailand, India and the Republic of Korea .Many more countries are switching over to biometric passports because it can easily confirm the authenticity of the holder's identity. Passports are used so a stamp can be placed in it to prove that the identity of the holder has been confirmed with the immigration officials in the country of travel.

In 1920, the International Conference on Passports, Customs Formalities and Through Tickets made a law that said passports must be issued in French and at least one other language. Now, many countries issue passports in English and the language(s) of the issuing country.

All content from Kiddle encyclopedia articles (including the article images and facts) can be freely used under Attribution-ShareAlike license, unless stated otherwise. Cite this article:
Passport Facts for Kids. Kiddle Encyclopedia.