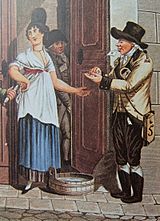 A seller and a clapper mailman (Vienna types around 1820)

Clapper Post (German: Klapperpost) was an urban postal service, which existed in Vienna (since 1772), capital of Austria, and in other cities of that country. Its name refers to an instrument, clapper (type of a rattle), into which a mailman struck, notifying about his arrival. In Vienna, Clapper Post existed more than ten years.

Photos of similar rattles are given that were used by English police in the 19th c.

All content from Kiddle encyclopedia articles (including the article images and facts) can be freely used under Attribution-ShareAlike license, unless stated otherwise. Cite this article:
Clapper Post Facts for Kids. Kiddle Encyclopedia.