Kids Encyclopedia Facts
This page is about general methods of telegraphy. For the messaging service, see Telegram (software). 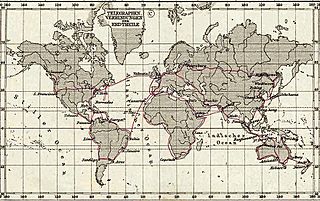 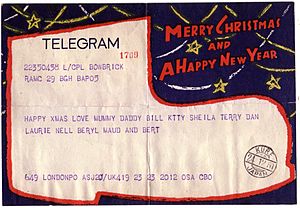 A telegram sent for christmas, in 1951

A telegram (Greek tele: distant and gramma: letter) is a written message transmitted by using an electric device. The message was carried along wires, and the text written or printed and delivered by hand or teleprinter.

Telegrams were very widely used, because private telephones were not usual. Nowadays they are not useful because most people have private telephones and the use of e-mail. The idea was developed by the British Post Office as a service for urgent letters.

All content from Kiddle encyclopedia articles (including the article images and facts) can be freely used under Attribution-ShareAlike license, unless stated otherwise. Cite this article:
Telegram Facts for Kids. Kiddle Encyclopedia.