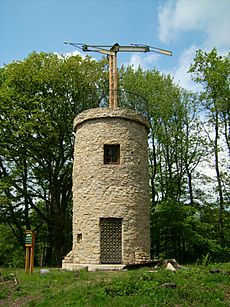 A replica of one of Chappe's semaphore towers in Nalbach, Germany 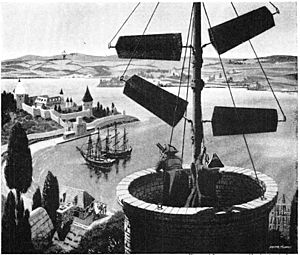 Illustration of signaling by semaphore in 18th century France. The operators would move the semaphore arms to successive positions to spell out text messages in semaphore code, and the people in the next tower would read them.

A semaphore line is an installation used to send optical signals. It is also known as optical telegraph. Common system include signal towers with special installations on them or hand-held flags. The meaning of the signal is determined by the position of the elements, for example the flags. The signal can be read when it is in a stable position. In modern usage, it refers to signalling with a set of flags.

Signal towers came before the electric telegraph. They were faster than sending out post riders with the information.

The following semaphore characters are presented as one would face the flagman:

All content from Kiddle encyclopedia articles (including the article images and facts) can be freely used under Attribution-ShareAlike license, unless stated otherwise. Cite this article:
Semaphore line Facts for Kids. Kiddle Encyclopedia.