A despatch rider is someone in the army who delivers messages ("despatch" or "dispatch" means "to send someone or something off on a journey"). A despatch rider either rides a horse or a motorcycle. 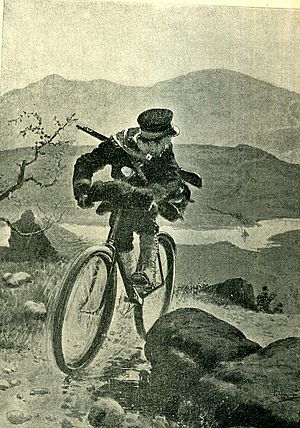 Despatch riders were used by armies to send messages between headquarters and the fighting soldiers. They might be delivering reports, but sometimes they took urgent messages which were often secret. It was a very dangerous job. Travelling between the lines of fighting armies the despatch rider could easily be blown up by a mine, shot by gunfire, or captured by the enemy.

All content from Kiddle encyclopedia articles (including the article images and facts) can be freely used under Attribution-ShareAlike license, unless stated otherwise. Cite this article:
Despatch rider Facts for Kids. Kiddle Encyclopedia.