Kids Encyclopedia Facts
Not to be confused with Ryegate.

Reigate is a town of over 20,000 inhabitants in eastern Surrey, England. It is in the London commuter belt and one of three towns in the borough of Reigate and Banstead. It is sited at the foot of the North Downs and extends over part of the Greensand Ridge. Reigate has a medieval castle and has been a market town since the medieval period, when it also became a parliamentary borough.

There are neolithic flint mines on the ridge of the North Downs above Reigate. Bronze Age settlement in the area is indicated by barrows on Reigate Heath. A Bronze Age spearhead was recovered on Park Hill in Reigate Priory Park. In 2004 a Roman tile kiln, dated from around AD 92 (pictured left), was recovered from the grounds of Rosehill in Doods Way. Tiles on the Rosehill site were first discovered in the 1880s. The tiles would have been used for important buildings in the area. The Rosehill find is the oldest recorded use of Reigate stone (ironstone of the Upper Greensand) for ashlar work.

Reigate was within the Reigate hundred, an Anglo-Saxon administrative division. Reigate appears in Domesday Book in 1086 as Cherchefelle, which appears to mean "the open space by the hill". It was held by William the Conqueror as successor to King Harold's widow Editha. Its Domesday assets were: 34 hides, 2 mills worth 11s 10d, 29 ploughs, 12 acres (49,000 m2) of meadow, pannage and herbage worth 183 hogs. It rendered £40 per year to its feudal system overlords. 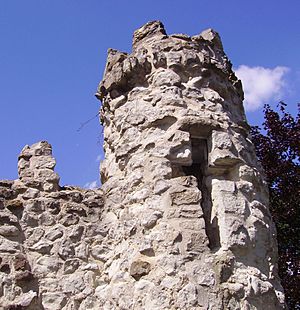 The earlier site of the town was, at least in part, in what is now the Church Street area. Part of the site was excavated in the 1990s, and this revealed that the settlement moved during the earlier part of the 12th century when the present town was formed. William I granted the land around Reigate to one of his supporters, William de Warenne, who was created Earl of Surrey in 1088. It is believed that his son, William de Warenne, 2nd Earl of Surrey, ordered that Reigate Castle be built, although the de Warennes had their southern base at Lewes, Sussex, as well as castles in Yorkshire and Normandy. Around 1150 the Earl de Warenne laid out a new town below the castle. This town forms the basis of modern-day Reigate. Little is known of the castle, which has never been excavated on any great scale. Local legend says that prior to the signing of the Magna Carta, the rebellious barons met to hammer out the details of the document in the extensive caves beneath the castle. The story however has no truth to it. The castle later fell into decay and the remains were demolished at the end of the 17th century, though the grounds remain as a public garden, and the caves are occasionally opened for tours.

The origin of the name Reigate is uncertain, but appears to derive from Roe-deer Gate, as the town was situated near to the entrance to the de Warenne's deer park.

The medieval town is centred on a north—south road of some antiquity as it incorporates the pre-Conquest road pattern. The story of the Pilgrim's Way passing through Reigate is a myth, although in the 13th century a chapel to St Thomas was built in the town centre for use by Canterbury pilgrims.

Areas of the town have been the subject of extensive archaeological investigation. Bell Street was certainly in existence by the middle of the 12th century and Mesolithic implements have been found here. Much of High Street is of slightly later date, although there appear to have been buildings along its south side, near to the junction with Bell Street, by the 13th century at the latest. The market place was originally around Slipshoe Street, at the junction of West Street, but infilled houses encroached on it and it had been moved to the east end of the High Street by the end of the 16th century. Many of the finds from the excavations are held in the museum of the Holmesdale Natural History Club in Croydon Road.

Probably early in the 13th century Grade I listed Reigate Priory was founded for regular canons of the Order of St Augustine, although it was also a hospital under the canons. After the dissolution of the monasteries in 1535 the estate was granted by Henry VIII to William Howard, 1st Baron Howard of Effingham, who soon converted the priory buildings into a residence. The Effingham branch of the Howard family, including the Earl of Nottingham (who as Lord High Admiral commanded the force which defeated the Spanish Armada), lived there until their heirs sold it to the wealthy London brewer, John Parsons, in 1681. Remains of the former monastery buildings lie beneath the lawns to the south of the present mainly 18th-century house, which is now used as a school.

The town developed a large trade in oatmeal during the 16th century but this had ceased by about 1720. There was a noted tannery at Linkfield Street which was expanded in the 19th century. It burnt down about 1930. 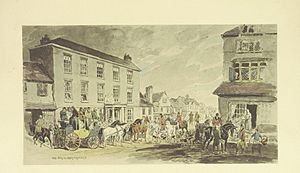 The White Hart pub as depicted in a book on the London–Brighton road from 1894.

The coming of the London and Brighton Railway in 1841 led to new buildings being built across the parish, resulting in a second town in the eastern fields around the railway station in an area that was previously uninhabited: this town at first had two names but since the early 20th century has been called Redhill.

Reigate has two windmills: a post mill on Reigate Heath and a tower mill on Wray Common. In the medieval period the parish had other windmills, about a dozen animal-powered mills for oatmeal and watermills on the southern parish boundary with the Mole and Redhill Brook.

The non-corporate Borough of Reigate, covering roughly the town centre, was formed in 1295. It elected two MPs until the Reform Act of 1832 when it lost one. In 1863 the whole parish was formally incorporated as a borough with Thomas Dann as its first mayor. In 1867 Redhill gained its first of two vestry committees within the parish system that occupied the east of Reigate. In 1868 Reigate borough was disenfranchised for corruption but representation was revived in the Redistribution of Seats Act in 1885. Reigate has been the term for the local MP's seat ever since. In 1974 the borough was merged with Banstead to the north. 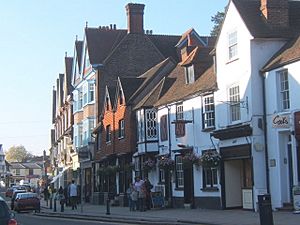 The town centre is, save for the castle, focused on Bell Street, leading south, and a long High Street/West Street conservation area with shops, cafés, bars and restaurants. Between the streets is a Morrisons supermarket. The other central supermarket is an M&S. The swathe of land from the town southwards, including the adjacent town of Redhill, is sometimes grouped together as the Gatwick Diamond, M23 corridor or Crawley Urban Area across more than 15 miles (24 km) into West Sussex. These three largely synonymous areas are interspersed with Metropolitan Green Belt land and are used by planners to highlight connectivity to Gatwick Airport and in respect of two, the city of Brighton and Hove.

In the winding lanes of the south-west of Reigate post town, towards the Mole Valley, are two distinct hamlets, Skimmington and Flanchford. 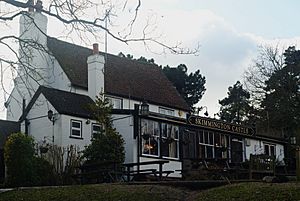 Skimmington is a small hamlet made up of Skimmington Cottages, Heathfield Farm and Nursery, and on the C-road, Flanchford Road, Reigate Heath Golf Club House and Course. The Skimmington Castle (the most historic building, Grade II-listed) pub is by the cottages. It arguably includes most of Reigate Heath; its buildings are however predominantly south-east of Flanchford Road. Skimmington includes eight pre-historic tumuli (bowl barrows), two in one close group, several within the golf club. It is well documented by rambling groups for its serenity, hills and woods – it lies on the Greensand Way 1 mile (1.6 km) along the due west path in the south of Reigate Park or Priory Park.

Half of this hamlet is within the post town, being in the far south west of Reigate. It is connected by Flanchford Bridge to Little Flanchford, which is in Mole Valley, within the rural definition of Leigh which has its village centre 0.5 miles (0.80 km) south-west.

Flanchford Mill, which has as its millpond a lake at the foot of the Wallace Brook, is a Grade II* listed building dating from 1768.

This Reigate neighbourhood is south of the relatively central Priory Park (named after the town's repurposed Priory), west of Meadvale and north and north-west of Woodhatch.

Its proximity to Reigate and to the out-of-town shopping parade of Woodhatch means that South Park consists of residential and recreational green spaces. The main amenities squarely within it are South Park Sports Association and an independent Church.

Woodhatch is the southern suburb of Reigate with one main curved parade of shops leading away from each side of the pre-20th century route of the London to Brighton road, which is the only road towards the south from Reigate excluding the motorway network. Reigate School was formerly called Woodhatch School. Spike Milligan lived in Orchard Way here between fighting as a young man in World War II.

Woodhatch is almost half of one of the wards of the United Kingdom, South Park and Woodhatch which has a population on 7,145. 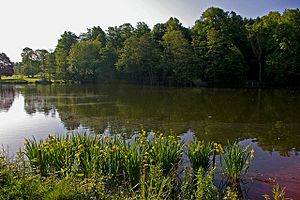 The most popular park in Reigate is the Priory Park, adjoining Reigate Priory School directly south of the High Street and west of Bell Street. It has a recreation area for smaller children as well as football fields, tennis courts, a skatepark, woodland and large Priory Pond, draining over a small weir. Priory Park also has a café set in a building named 'The Pavilion', which also houses bulletin boards for the people of Reigate.

Reigate is a few minutes from Junction 8 of the London orbital M25 motorway. The town's one-way system includes parts of the A25 and the A217.

Reigate is linked to Redhill by the Metrobus. Other bus routes also link the town to other areas in and around Redhill and Reigate.

See also: List of places of worship in Reigate and Banstead

Reigate has several churches. St Mary's Parish Church (Anglican) is in Chart Lane east of the town centre with its notably old chapel of ease St Cross in the windmill on Reigate Heath (see 'Flanchford' below). Reigate Methodist Church is in the town centre. Reigate Baptist Church, Reigate Park URC, Sandcross Church, and Reigate and Redhill Community Church are further out. The Holy Family Catholic Church is the only Roman Catholic Church in Reigate. The Religious Society of Friends have a meeting house on Reigate Road (Thomas Moore House) and St Philips Church on Nutley Lane.

The town has facilities for these mainstay amateur sports:

In gyms, fitness studios and pools, a local council-supported centre is on the border with Redhill. There are also a number of private gyms/studios are active, one of which is not in the town centre.

Three golf courses are within the town's boundaries. One of these covers the east of the lightly populated (and on many analyses merged) village of Gatton.

All content from Kiddle encyclopedia articles (including the article images and facts) can be freely used under Attribution-ShareAlike license, unless stated otherwise. Cite this article:
Reigate Facts for Kids. Kiddle Encyclopedia.