Reigate Castle is a ruined castle in the town of Reigate in the county of Surrey, England. 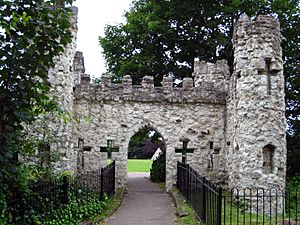 In 1777 a mock medieval gateway was built on the site of Reigate Castle.

King William I granted the land around Reigate to one of his supporters, William de Warenne, who was created Earl of Surrey in 1088. It is believed that his son, William de Warenne, 2nd Earl of Surrey, ordered that Reigate Castle be built, although the de Warennes had their southern base in Lewes, Sussex, as well as castles in Yorkshire and Normandy. Around 1150 the de Warennes ordered that a town be constructed below the castle. This town forms the basis of modern-day Reigate. The origin of the name Reigate is uncertain, but appears to derive from Roe-deer Gate, as the town was situated near to the entrance to the de Warenne's deer park. Another possibility is that Reigate derives from Rhie-gat, roughly translating to the River's Course.

In 1216 the castle was one of many captured by the French in southern England, including Chichester Castle. In 1347 the castle became the property of Fitzalan, Earl of Arundel. From 1397 it was owned by a number of Lords of the Manor of Reigate, including the influential Howard family. It was occupied until the 16th century, but fell into disrepair afterwards. It was demolished in 1648 after occupation as a garrison during the Civil War by followers of a Royalist uprising. 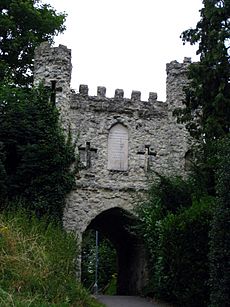 In 1777 a mock medieval gateway was built over the ruins of the original castle. An inscription is written on the side of the gateway, in English on one side and Latin on the other:

None of the original castle buildings have survived, with the exception of the Barons' Cave.

Little more is known of the castle which has never been excavated on any great scale. Local legend says prior to the signing of the Magna Carta, the rebellious barons met to hammer out the details of the document in the extensive caves below the castle. 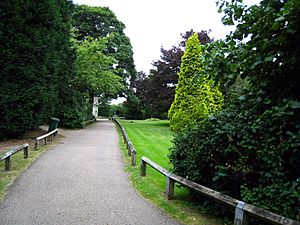 The Reigate Castle Tunnel runs under the grounds of Reigate Castle and was constructed in 1823. It is believed to be Europe's first road tunnel and is pedestrianised.

The castle gate is the main feature of Reigate and Banstead's municipal coat of arms.

Tours of the Baron's and Tunnel Road Caves take place on the second Saturday of every month between May and September inclusive.

All content from Kiddle encyclopedia articles (including the article images and facts) can be freely used under Attribution-ShareAlike license, unless stated otherwise. Cite this article:
Reigate Castle Facts for Kids. Kiddle Encyclopedia.