Vale of Holmesdale facts for kids

Looking south from Blue Bell Hill across the Medway Valley a deep part of the valley, with the village of Eccles in the foreground, the Aylesford Newsprint plant in the middle ground, Ditton and Maidstone beyond. 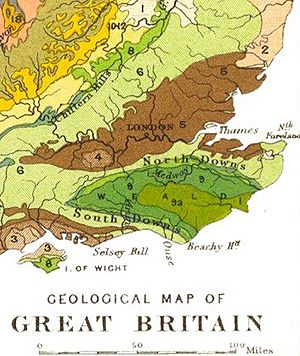 Geology of the South East, The vale is the thin lime green belt

View from North downs towards Reigate. 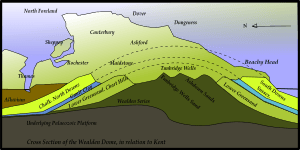 A cross-section, showing the Wealden Dome, and relating it to the towns of Kent 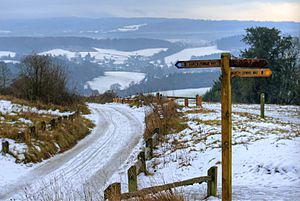 Holmesdale, also known as Vale of Holmesdale, is the valley in South-East England that runs between the hills of the North Downs and the Greensand Ridge, through the counties of Kent and Surrey. It stretches from Folkestone on the Kent coast, through Ashford, Harrietsham, Maidstone, Riverhead/Sevenoaks, Oxted, Godstone, Redhill, Reigate, Dorking, Gomshall, Guildford, Puttenham and ending at Farnham.

Holmesdale is part of the Weald Basin and Weald-Artois Anticline. The valley is bordered on its north side by the chalk escarpment of the North Downs, and on its south side by the dip slope of the Greensand Ridge.

The valley's composition is primarily Gault Clay and Upper Greensand, with Lower Chalk wash at the foot of the Downs along its north edge and eroded Lower Greensand at its south edge also forming part of the valley floor in places. The vale gently ascends and descends several times along its length, with higher elevations near Lenham and Westerham (in Kent), and Wotton (in Surrey) acting as drainage divides for the valley's several drainage basins and rivers.

The valley is part of the drainage basins of the rivers Stour and Medway; and the Thames tributaries the Darent and Mole.

The M25 motorway runs westward along Holmesdale after descending through the North Downs near Sevenoaks (Junction 5), before ascending up the downs again at Reigate (Junction 8). The A25 road connects the towns and villages in Holmesdale from Wrotham Heath to Shere, alternating between running in the valley and running along the Greensand Ridge. At Shere the A25 ascends the downs, passing over the top at Newlands Corner, to run north of the downs to Guildford.

The North Downs railway line runs along the valley from Redhill to Gomshall.

Usage of the term

Local businesses, schools, and clubs use the valley's name, for example the Holmesdale Building Society in Reigate; The Holmesdale School in Snodland; and the Holmesdale Natural History Club, founded in 1857, which runs a museum of the same name in Reigate.

All content from Kiddle encyclopedia articles (including the article images and facts) can be freely used under Attribution-ShareAlike license, unless stated otherwise. Cite this article:
Vale of Holmesdale Facts for Kids. Kiddle Encyclopedia.