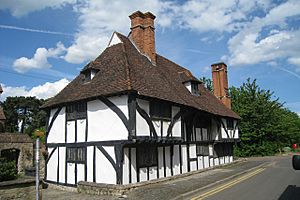 The Tudor Mulberry Cottages on the High St 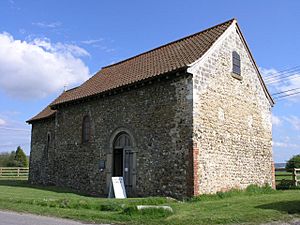 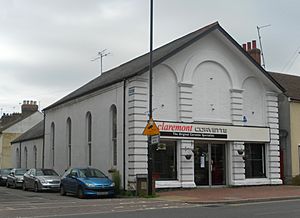 Snodland is a small town on the River Medway, located between Rochester and Maidstone in the English county of Kent. It is about 27 miles from central London and at the 2011 census had a population of 10,211 people.

"Snoddingland" is first mentioned in a charter of 838 in which King Egbert of Wessex gave "four ploughlands in the place called Snoddingland and Holanbeorge" (Holborough) to Beornmod, the Bishop of Rochester. Since -ingland names are mostly derived from personal names, the name appears to refer to ‘cultivated land connected with Snodd’ or Snodda. The Domesday Book refers to it as "Esnoiland".

The first Roman advance in the conquest of Britain may have crossed the River Medway near Snodland, although there are contending locations. The supposed crossing place is marked by a memorial on the opposite side of the river from Snodland, close to Burham. Near this spot, a ferry later carried pilgrims bound for Canterbury along the Pilgrims' Way.

Bishop Gundulph, at the end of the 11th Century, built a palace at Halling that was used by his successors until the 16th century.

Lime working had been carried out at Snodland for centuries, but expanded dramatically in the 19th Century, as building boomed. The firm of Poynder and Medlicott began quarrying on the Snodland-Halling border in the early 19th century and the company was taken over by William Lee in 1846. Others followed and the last one was built in 1923 by W L H Roberts at Holborough. Lime for building Waterloo and other London bridges came from the area.

The paper-making industry came to Snodland around 1740, when the May family built a mill which the Hook family took over in 1854. New manufacturing techniques and the coming of the railway in the 1850s improved paper production from five to 70 tons a week. Snodland's population doubled between 1840 and 1857. After the Medway Valley railway was opened on 18 June 1856, the village trebled in size between 1861 and 1881. The parish boundary was re-aligned in 1898 and again in 1988 to reflect the growth of Snodland, both changes absorbed areas of Birling Parish, known locally as "Lower Birling".

Snodland is now under a 10-year development plan by Tonbridge and Malling Borough Council to redevelop and expand the Holborough part of Snodland. In 2005 Berkeley Homes began the construction of around 1,200 houses on the former Holborough Quarry.

The town is wedged between the North Downs to the west and the river Medway to the east. Leybourne Lakes Country Park was created from disused gravel pits to the south that have been flooded and landscaped to make fishing and wildlife lakes; across the river is the Burham Marsh nature reserve, a tidal reed bed.

Since 1986, Snodland has been twinned with Moyeuvre-Grande, a town of similar size, located near Metz in North East France. The towns planned to celebrate the thirtieth anniversary of the partnership in May 2016.

The Roman villa in Church Field has survived quite well and has been partially excavated. Aside from the churches (see below), Woodlands Farmhouse on Constitution Hill is a Grade II* listed building dating to the early-mid 15th century. The Mulberry Cottages on the High Street were originally a classical Wealden hall house dating to c1450; there's another hall house at 72 Holborough Rd. There are a number of more recent listed structures, perhaps the most unusual is a mock ruin, built c1850 to the south of the water company headquarters on the High St.

The town is situated on the A228 road connecting the Medway Towns with Tonbridge. The M20 motorway junction 4 is 2 miles south of the town allowing good access to London and the Channel Ports. The Snodland by-pass takes heavy commercial traffic away from the town centre (an area commonly referred to as "the village" by residents). The Medway Valley Line between Strood and Maidstone passes through Snodland. The railway station opened with the extension of the North Kent Line from Strood to Maidstone (SER) on 18 June 1856. There are peak time services via HS1 direct to St Pancras, otherwise for London passengers change at Strood or Maidstone Barracks/Maidstone East.

The town continues to support two active Anglican churches within the Archdeaconry of Rochester, but Roman Catholic, Methodist, United Reformed and Swedenborgian churches have all closed since the 1970s. The parish church of All Saints dates to the 12th century with many additions since then. The population growth in the 19th century led to the requirement for a new church in the south of the town, Christ Church which was designed by Percy Monkton in Early English Gothic Revival style. St Benedict's Church, Paddlesworth is a Norman church on the Pilgrim's Way about a mile west of the town. It dates from the early 12th century but has spent much of its life as a farm building and is currently in the care of the Churches Conservation Trust.

There is a Kingdom Hall on Church Field, used by local Jehovah's Witnesses. In the late 1940s the defunct Grand Picture Palace cinema on Holborough Road was converted into the Catholic Church of St. Thomas of Canterbury, but it was closed in 2007 and redeveloped. A Primitive Methodist Chapel on Chapel Rd closed in 1976 and is now a car showroom. The Swenborgian Church of the New Jerusalem on the High St was used until the 1980s but is now a private house. The United Church on the High St closed in 2011 after becoming structurally unsound. The cemetery opened in 1896 with the house and chapel being designed by Hubert Bensted of Maidstone.

All content from Kiddle encyclopedia articles (including the article images and facts) can be freely used under Attribution-ShareAlike license, unless stated otherwise. Cite this article:
Snodland Facts for Kids. Kiddle Encyclopedia.