Kids Encyclopedia Facts
For other uses, see Tonbridge (disambiguation).
Not to be confused with Tunbridge Wells.

Tonbridge (pronunciation and historic spelling Tunbridge) is a market town in the English county of Kent, with a population of 40,356 in 2015. It is located on the River Medway, approximately 4 miles (6 km) north of Royal Tunbridge Wells, 12 miles (19 km) south west of Maidstone and 29 miles (47 km) south east of London. It belongs to the administrative borough of Tonbridge and Malling (population 120,805 in 2011).

The town was recorded in the Domesday Book 1087 as Tonebrige, which may indicate a bridge belonging to the estate or manor (from the Old English tun), or alternatively a bridge belonging to Tunna, a common Anglo-Saxon man's name. Another theory suggests that the name is a contraction of "town of bridges", due to the large number of streams the High Street originally crossed.

Until 1870, the town's name was spelt Tunbridge, as shown on old maps including the 1871 Ordnance Survey map and contemporary issues of the Bradshaw railway guide. In 1870, this was changed to Tonbridge by the GPO due to confusion with nearby Tunbridge Wells, despite Tonbridge being a much older settlement. Tunbridge Wells has always maintained the same spelling. 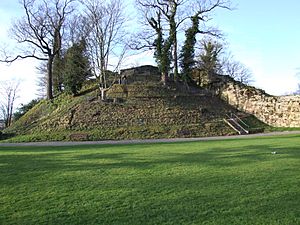 The motte of Tonbridge Castle 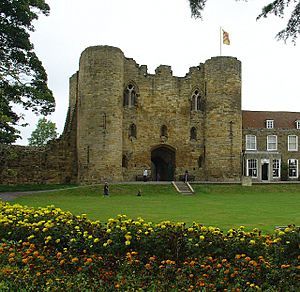 Tonbridge stands on spur of higher land where the marshy River Medway could be more easily forded. Ancient trackways converged at this point. There is no record of any bridge before 1191. For much of its existence, the town remained to the north of the river, since the land to the south was subject to extensive seasonal flooding. One part of the town is called 'Dryhill'. Richard Fitz Gilbert de Clare founded the Priory of St Mary Magdalene in 1124.

A castle was built here in the 11th century by Richard Fitz Gilbert, son of the murdered guardian of William the Conqueror in his infancy. Richard was responsible for governing England in William I's many absences.

The town was besieged by William Rufus, soon after his accession to the throne, because the Earl had pledged allegiance to William's brother, Robert. It is thus hardly surprising that the arrow that killed William Rufus a few years later in the New Forest was fired by Walter Tirel who was born in town as well as the Earl's in-law.

It was soon afterwards taken again, this time by King John only a few months after the signing of the Magna Carta. Both the Earl and his son were signatories and guardians of the document responsible for its compliance. It was subsequently besieged by Prince Edward, son of Henry III. On this occasion the besieged garrison burnt the town rather than see it fall. The town and Tonbridge Castle were rebuilt after this and in the 13th century became an official residence and records repository of Edward II.

The castle was finally taken by Henry VIII when its owner, the Duke of Buckingham, was executed for treason.

In medieval times, Tonbridge was considered an important strategic settlement. The King intended it to be a walled town, and a charter was issued allowing for walls to be built, a market to be held, court sessions to be held and two members from the town to attend parliament. The walls were never built, perhaps because the castle's large outer bailey could have easily accommodated the townspeople in times of strife. A surrounding bank and ditch known as The Fosse was erected. Today only traces of this encircling defence now remain. The historic core of the town still contains a large number of working buildings dating from the 15th century: the oldest is Port Reeves in East Street.

Tonbridge School, the famous public school, was established in 1552 under letters patent of Edward VI, to educate the sons of local gentry and farmers (There was already a nearby school in existence for poorer boys, now Sevenoaks School.)

During Queen Mary's reign Tonbridge was involved in an unsuccessful uprising against the Queen's marriage to the King of Spain, with 500 townspeople involved in the Battle of Hartley in 1554. As a result, the town was chosen for a place of execution of a number of Protestants; and in 1555 James Tutty and Margery Polley were burned at the stake in the town and Joan Beach met the same fate in 1556 at Rochester. A memorial to Margery Polly is on the green at Pembury.

During the Civil War, the town was garrisoned by the Parliamentarian side who refortified the castle. Royalist sympathisers made several attempts to take the town but were repulsed. 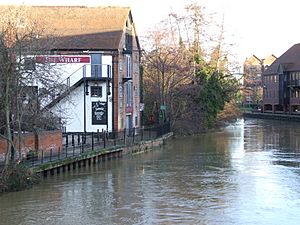 The Wharf on the Medway Navigation, downstream of the Big Bridge.

In 1740 an Act of Parliament was passed to make the River Medway navigable to Tonbridge by the Medway Navigation Company, allowing such materials as coal and lime to be transported to the town, and gunpowder, hops and timber to be carried downriver to Maidstone and the Thames. For a hundred years the Medway Navigation Company was highly profitable, paying out good dividends to its investors, but after the arrival of the railway in 1842 the company went into a steep decline and all commercial traffic ceased in 1911 when the company collapsed. Some of the original warehouses and the wharves are still recognisable today, downstream of the town's main bridge.

Later, the town and its surroundings became famous for the production of finely inlaid wooden cabinets, boxes and other objects called Tunbridgeware, which were sold to tourists who were taking the waters at the nearby springs at Tunbridge Wells. Another speciality in the town was until recently the production of cricket balls (the original cricket ball factory in Preston Road was demolished in 2012 to make way for housing) and other sports goods. 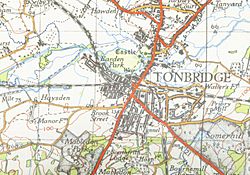 During the March 1880 parliamentary election, Tonbridge was the scene of a riot. On the announcement of the results, several thousand people started to hurl stones and cobbles at each other in the High Street near the Rose and Crown Hotel. The county's Chief Constable Captain Ruskin, with over a hundred policemen, charged the crowds many times during the evening, only to end up as the target of the crowd, who started hurling stones and cobbles at them instead of each other. Many people, including twelve policemen, were seriously injured before the crowd finally dispersed at midnight.

The United Kingdom's first speeding fine was handed out by Tonbridge Petty Sessions court in 1896. The guilty driver was a Mr Walter Arnold of East Peckham, who was fined one shilling for speeding at 8 miles per hour (13 km/h) in a 2 mph (3 km/h) zone in Paddock Wood, in his Karl Benz powered car. Mr Arnold was apprehended by a policeman who had given chase on his bicycle.

During World War II a prisoner of war camp was built at the junction of Tudeley Lane and Pembury Road on land belonging to Somerhill. After the war the camp was used as temporary housing for people made homeless by the Blitz. The site is now occupied by the Weald of Kent Girls' Grammar School.

Ruth Ellis, the last woman in the United Kingdom to be hanged, was married at the registry office in Tonbridge on 8 November 1950.

Tonbridge was the location of the largest cash theft in British criminal history. On 22 February 2006, over £53.1 million was stolen from the Securitas cash-handling depot in Vale Road to the east of the High Street. During the following police investigation, around half of the money was recovered. On 28 January 2008 five people were convicted at the Old Bailey. 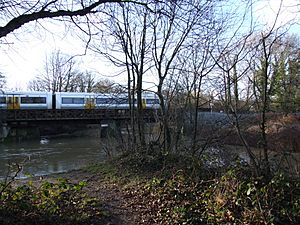 Tonbridge railway station is one of Kent's busiest with 4.1 million passengers using it each year. It is an important railway junction with lines to London, Ashford, Hastings and Redhill. The town is also served by the A21 trunk road between London and Hastings and the A26 between Maidstone and Brighton. It is also close to the M25 motorway.

Tonbridge is served by numerous bus routes, most of which are run by Arriva Southern Counties.

Dualing of the A21 from Castle Hill to Pembury, where a new regional hospital opened in 2011, has commenced and works are set for completion in 2017.

Before World War I, aviation pioneers Frank Gooden and Richard Johnson tried to establish an airfield to the north of Tonbridge at Cage Green Fields, at the top of the ridge which The Ridgeway ascends, and east of Shipbourne Road. An accident is recorded as having occurred on 24 December 1913 at the airfield, although neither Gooden or Johnson was injured. The scheme was ended by the outbreak of war.

Tonbridge is twinned with the following places:

All content from Kiddle encyclopedia articles (including the article images and facts) can be freely used under Attribution-ShareAlike license, unless stated otherwise. Cite this article:
Tonbridge Facts for Kids. Kiddle Encyclopedia.