Haute-Loire (Occitan: Naut Léger) is a département in the Auvergne-Rhône-Alpes region of south-central France. It is named after the Loire river.

The department of Haute-Loire was created on 4 March 1790 with three districts: Le Puy, Brioude and Yssingeaux. The capital was Le Puy. The new department was formed with territories of three historic provinces: the Languedoc, the Auvergne and the Lyonnais.

The department is surrounded by 5 departments in 2 regions:

The main rivers in Haute-Loire are:

The Köppen climate classification type for the climate at Le Puy-en-Velay is an "Oceanic climate" (also known as Maritime Temperate climate) and of the subtype Cfb.

Haute-Loire is managed by the Departmental Council of Haute-Loire in Le Puy-en-Velay. The department is part of the Auvergne-Rhône-Alpes region.

There are 3 arrondissements (districts), 19 cantons and 257 communes (municipalities) in Haute-Loire.

The following is a list of the 19 cantons of the Haute-Loire department (with their INSEE codes), following the French canton reorganisation which came into effect in March 2015:

The inhabitants of Haute-Loire are known, in French, as Altiligériens (women: Altiligériennes).

Evolution of the population in Haute-Loire 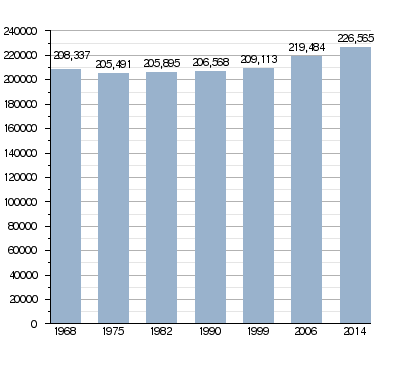 All content from Kiddle encyclopedia articles (including the article images and facts) can be freely used under Attribution-ShareAlike license, unless stated otherwise. Cite this article:
Haute-Loire Facts for Kids. Kiddle Encyclopedia.