Loire (Occitan: Léger) is a French department in the east-central part of France in the Auvergne-Rhône-Alpes region and named after the Loire river. Its prefecture is the city of Saint-Étienne.

After the Battle of Waterloo in 1815, the department was occupied by troops from Austria from June 1815 to November 1818.

The capital was moved from Montbrison to Saint-Étienne in 1855.

The department borders with 7 other departments in 2 regions:

The department is in eastern Massif Central and there are several mountain chains; some of the chains and mountains are:

The main rivers of Loire are:

The climate of the Loire department, in the city of Andrézieux-Bouthéon (near Saint-Étienne and where is the Saint-Étienne-Loire Airport), is an oceanic climate, Cfb (Marine West Coast Climate) in the Köppen climate classification.

Loire is part of the region of Auvergne-Rhône-Alpes. The department is managed by the Departamental Council of the Loire in Saint-Étienne.

There are 3 arrondissements (districts), 21 cantons and 326 communes (municipalities) in Loire.

The following is a list of the 21 cantons of the Loire department (with their INSEE codes), in France, following the French canton reorganisation which came into effect in March 2015:

The inhabitants of Loire are known, in French, as Ligériens (women: Ligériennes). Ligérien comes from Liger, the Latin name of the Loire river.

The city with more people living in it is the capital, Saint-Étienne (170,761 inhabitants). The subprefectures of Roanne and Montbrison have, respectively, 35,200 and 15,689 inhabitants.

Evolution of the population in Loire 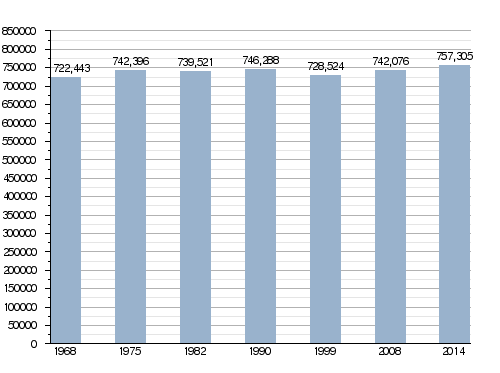 The most important cities in the department are:

All content from Kiddle encyclopedia articles (including the article images and facts) can be freely used under Attribution-ShareAlike license, unless stated otherwise. Cite this article:
Loire Facts for Kids. Kiddle Encyclopedia.