Westerham is a town and civil parish in Kent, England, 5 miles (8 km) west of Sevenoaks.

It is recorded as early as the 9th century, and was mentioned in the Domesday Book in a Norman form, Oistreham (compare Ouistreham in Normandy, Oistreham in 1086). Hām is Old English for a village or homestead, and so Westerham means a westerly homestead. The River Darent flows through the town, and formerly powered three watermills. 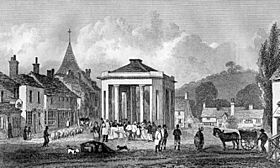 There is evidence that the area around Westerham has been settled for thousands of years: finds such as a Celtic fortification (c 2000 BC) and a Roman road are close by, along with the remains of a Roman encampment just past the ruins a of tower south of the town at the summit of Tower Woods.

The tower dates back to the 18th century, and was originally constructed by the owners of Squerryes Court as a folly for their children's amusement.

The manor was originally run by Godwin, Earl of Wessex and later by his son Harold Godwinson the last Saxon King of England. The first Norman lord of Westerham was Eustace II of Boulogne, and the town appears in the Domesday Book as Oistreham. By 1227 Henry III granted Westerham a market charter, making the new village a major player in the buying and selling of cattle in Kent, a tradition that survived to 1961 when the last cattle market was held. St Mary's Church is thought to date from the 13th century, although it is much altered in Victorian times. In 1503 the Protestant martyr John Frith was born in the town.

The church is unusual in that it displays the only known representation of a royal arms of King Edward VI (reigned 1547–1553) in a church. There is little doubt that it is the king's arms as the supporters are a lion and a dragon, and there is a curious Latin phrase beside the arms: "VIVAT REX CURAT LEX" (Long live the King, custodian of the law). England did not have another male monarch until the Union of the Crowns in 1603.

General James Wolfe was born in the town in 1727 at what is now known as the Old Vicarage due to a terrible storm on the night he was born. He lived in Quebec House – many streets and buildings are named after him and St Mary's contains not only the font in which he was baptised but also a memorial window to him by Edward Burne-Jones. The town square contains statues to both Wolfe and Churchill.

Alice Liddell, cited as the inspiration for Lewis Carroll's children's book Alice's Adventures in Wonderland lived in the Vicarage for a brief period. Alice rented 'The Breaches' just before she died and then when she became very ill she went to stay with her sister Rhoda at Hoseyrigge in Westerham. She was born at Westminster and when she died aged 82 a memorial service was held for her at St Mary's Church. She was not buried in Westerham. Record producer Brian Higgins, whose Xenomania production team produced hit singles and albums for artists such as Girls Aloud, Kylie Minogue, Sugababes, Pet Shop Boys, Texas and Franz Ferdinand, now occupy what used to be known as the Old Vicarage.

BBC Children's TV founders Freda Lingstrom and Maria Bird lived together in Westerham and named their production company Westerham Arts which was commissioned by the BBC to create The Woodentops, Andy Pandy, Muffin the Mule and Bill and Ben the Flower Pot Men.

During a January 1967 visit to Knole Park in Sevenoaks to shoot a promotional film for Strawberry Fields Forever and Penny Lane, John Lennon stopped at a Westerham antiques shop and purchased a poster for Pablo Fanque's Circus Royal, which later inspired the song, "Being for the Benefit of Mr. Kite!"

As well as the parish church (a Grade II*-listed building), there is a Grade II-listed chapel associated with the Congregational Federation and a Roman Catholic church. Westerham Evangelical Congregational Church dates from 1839 and St John the Baptist's Catholic Parish Church opened in 1955. 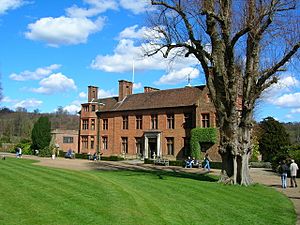 In 1922 Winston Churchill MP purchased Chartwell Manor on the outskirts of Westerham, which, apart from the time he spent at 10 Downing Street, was his home for the rest of his life. Chartwell is now administered by the National Trust.

There is a statue of Sir Winston Churchill on the village green at Westerham. It was sculpted by Oscar Nemon and stands on a base of Yugoslavian stone, the gift of Marshal Josip Broz Tito.

Westerham is served by the Transport for London bus service 246 with services to Bromley via Hayes and Biggin Hill, as well as the go route 401 to Sevenoaks and Southdown 594 and 595 to Tatsfield, Limpsfield and Oxted. The nearest rail link to Westerham is at Oxted station.

Westerham is on the A25 road running along the Vale of Holmesdale, slightly south of the M25 motorway. The A233 road goes north to Biggin Hill and Bromley.

All content from Kiddle encyclopedia articles (including the article images and facts) can be freely used under Attribution-ShareAlike license, unless stated otherwise. Cite this article:
Westerham Facts for Kids. Kiddle Encyclopedia.