Kids Encyclopedia Facts
Not to be confused with Andy Panda.

Andy Pandy was a British children's television series that first appeared on BBC TV in summer 1950. Originally live, a series of 26 filmed programmes was shown until 1970, when a new series of 13 episodes was made. A revival of the show was made in 2002. The show was the basis for a comic strip of the same name in the children's magazines Robin and Pippin.

The original version of Andy Pandy premiered on BBC TV in 1950, on either 11 July or 20 June, as part of the For the Children strand (later Watch with Mother) narrated by Maria Bird. Initially the programmes were transmitted live, but it was realised that if the programmes were filmed, they could be repeated. Twenty-six episodes of fifteen minutes duration were filmed on 16mm, and were produced around 1952; they were repeated continuously until 1969. In 1970, thirteen new episodes were made in colour with Vera McKechnie as narrator.

A marionette who lived in a picnic basket, Andy was later joined by Teddy, a teddy bear, and Looby Loo, a rag doll, who would appear/come to life when Andy and Teddy were not around. Looby Loo would sing the song Here we go Looby Loo. All three lived in the same picnic basket. Each episode ended with a variation on the song: "Time to go home, Time to go home, Andy is waving goodbye."

It is claimed that the design for the character was based on Paul Atterbury, the then young son of puppeteer Audrey Atterbury. A comic-strip version was published in Robin.

The production staff for the original series were: 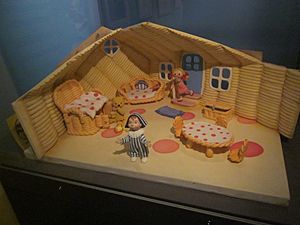 Stop motion set on display at the National Science and Media Museum, with Andy Pandy, Looby Loo and Teddy

Another set of 52 episodes was made in 2002, using the stop-mo technique instead of string puppeteering. The original nursery and garden were expanded to an entire village, with Andy, Teddy and Looby Loo now owning individual houses, and four new characters were introduced into the series: Missy Hissy; and her brother, another snake who is never seen Tiffo; a teal-and-purple dog, Bilbo (vocals performed by David Holt); a sailor, and Orbie (vocals performed by Maria Darling); a yellow-and-blue ball. The new series was narrated by actor Tom Conti. While the emphasis of the original series was on music and movement, the emphasis of the 2002 series was on making and doing.

Listed are the episodes in each series, along with their songs (if any):

All content from Kiddle encyclopedia articles (including the article images and facts) can be freely used under Attribution-ShareAlike license, unless stated otherwise. Cite this article:
Andy Pandy Facts for Kids. Kiddle Encyclopedia.