Kylie Ann Minogue (born 28 May 1968) is an Australian singer, songwriter and actress. She became popular in the late 1980s, because of her role in the Australian television soap opera Neighbours, before becoming a dance-pop singer.

Minogue was born in Melbourne to a Welsh immigrant mother and Irish-Australian father. Her sister Dannii Minogue is also a singer and actress, and her brother Brendan works as a cameraman.

She was signed to a contract by British songwriters and producers Stock, Aitken & Waterman, she got hit records throughout the world. Her popularity began to decline by the early 1990s and she left Stock, Aitken & Waterman in 1992. For years she tried to become an independent performer and songwriter. Her projects were widely talked about, but her albums resulted in the lowest sales of her career.

In 2000, Minogue became popular again as a dance-pop singer and became well known for her music videos and elaborate concerts. She has one of the longest and most successful careers in pop music, and she has become one of the most recognisable celebritiess. In Australia, she holds the record for the highest concert ticket sales for a woman, and has had nine singles at number one on the ARIA Singles Chart. 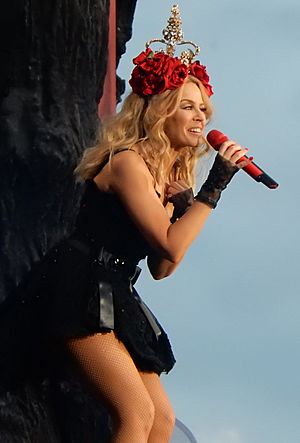 All content from Kiddle encyclopedia articles (including the article images and facts) can be freely used under Attribution-ShareAlike license, unless stated otherwise. Cite this article:
Kylie Minogue Facts for Kids. Kiddle Encyclopedia.