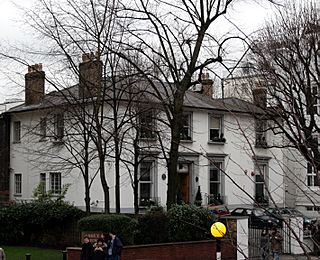 The outside of EMI's Abbey Road Studios, London, England

Abbey Road had three different studios for most of its history. Other space was turned into a fourth studio later. Studio One is large, and used to be a ballroom. Symphony orchestras and very large bands and groups are recorded there. Studio Two is smaller, and works best for small combos or groups of musicians. Studio Three is much smaller, and is meant for soloists and duos. Studio Four is mostly for post-production, where changes are made to earlier recordings.

All content from Kiddle encyclopedia articles (including the article images and facts) can be freely used under Attribution-ShareAlike license, unless stated otherwise. Cite this article:
Abbey Road Studios Facts for Kids. Kiddle Encyclopedia.