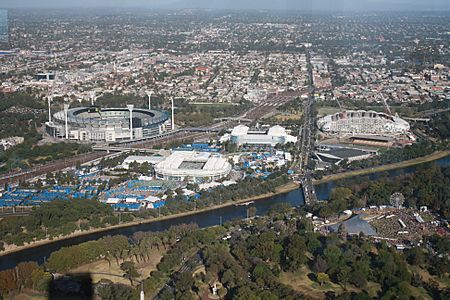 Melbourne Park is a sports venue in the Melbourne Sports and Entertainment Precinct in Melbourne, Victoria, Australia. Since 1988, Australia's bicentenary, Melbourne Park has been home of the Australian Open Grand Slam tennis tournament, which is played annually in January. The park has facilities capable of hosting basketball, netball, music concerts and other events. In the past Melbourne Park has hosted ice skating, cycling, international swimming and motorsport events.

Melbourne Park is owned by Melbourne & Olympic Parks, which also runs the adjacent Melbourne Rectangular Stadium. The Yarra Park section of the Sports and Entertainment Precinct is run separately.

The park was originally known as Flinders Park until 1996, when then-Premier, Jeff Kennett decided to change the name to Melbourne Park, mainly to advertise the name "Melbourne" to a wide international audience during events held there. The decision was met with strong opposition, and was compared by some to renaming Stade Roland Garros (home to the French Open in Paris) "Paris Park". However, over the years, the name has become accepted by Melburnians.

Flinders park was developed in 1988 beside the Jolimont Yard as a new precinct to host the Australian Open. The previous venue, Kooyong Lawn Tennis Club, had become too small for the burgeoning tournament. Flinders Park's construction was completed in 1988 at a cost of at least $94 million. The unveiling of the new precinct was met with incredibly positive reviews by players and spectators, with some labelling the facilities and amenities the best of the four Grand Slams. Expansion of the precinct next occurred in 1996, when a further $23 million was invested to create two fully seated and larger show courts and eight new ‘Ace’ courts, as well as a large grassy space, now known as ‘Garden Square’.

The organisation responsible for managing the precinct is the Melbourne & Olympic Parks Trust, which was established in October 1995 in accordance with the provisions of the amended Melbourne & Olympic Parks Act 1985. In April 2018, Tennis Australia revealed it harboured ambitions to take over management rights of the entire precinct, with the hope of maximising its use for other sporting and cultural events outside of the Australian Open.

While it is best known for being a tennis venue, Melbourne Park also plays host to a number of other sports and musical events throughout the year. The venue tends to be used by more popular international performers, as it is the largest the city has to offer, excluding the Docklands Stadium in the Docklands and the nearby Melbourne Cricket Ground.

Melbourne Park is the only Grand Slam tennis venue to have three courts installed with a retractable roof, allowing play to continue in the event of rain or extreme heat. All three stadium courts/arenas are multi-purpose, being used for a variety of other sporting and musical events during the year, outside of their Australian Open commitments in January. In total there are 35 outdoor Greenset tennis courts at Melbourne Park. The courts were Plexicushion from 2008 to 2019. 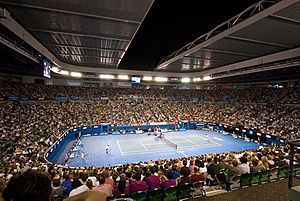 Formerly known as Centre Court, Rod Laver Arena has a capacity of nearly 15,000 and has a retractable roof. The arena was opened in 1988 prior to that year's championships and was originally known as the National Tennis Centre at Flinders Park. It was not until January 2000 that the arena was named after one of the greatest Australian tennis players, Rod Laver.

Rod Laver Arena has played host to some of the most memorable tennis matches, such as: 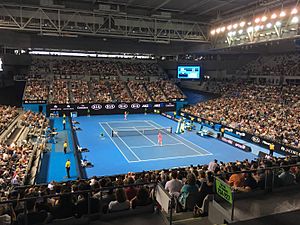 The second largest court is John Cain Arena (originally known as the Multi-Purpose Venue, as it was referred to during the 2006 Commonwealth Games), which was opened in 2000. It has a capacity of 10,500, and also has a retractable roof. Completed in 2000 for a cost of $65 million, the arena has hosted a wide variety of sporting and other events since its inception including boxing bouts such as Anthony Mundine vs. Lester Ellis, as well as Grand Finals in netball and basketball and concerts performed by Scissor Sisters, BB King, Nicki Minaj and One Direction.

During the Australian Open, John Cain Arena hosts numerous day and night matches up to the end of the fourth round. Most notably it is the venue of the longest women's singles match in a Grand Slam. Francesca Schiavone defeated Svetlana Kuznetsova 6-4 1-6 16-14 in four hours and forty-four minutes at the fourth round of the 2011 Australian Open. John Cain Arena has been accessible for Australian Open patrons with a ground pass (i.e.: cheapest form of ticketing available) since 2015 and subsequently the arena has developed a reputation for being, like most outdoor courts, an incredibly passionate venue with terrific atmosphere, particularly when Australians are playing on the court. 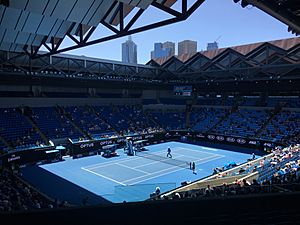 Formerly known as Show Court 1, Margaret Court Arena was opened in 1988 along with the Melbourne Park precinct. Originally seating 6,000 spectators, the arena underwent a renovation which increased the capacity to 7,500 and added a retractable roof – the fastest of its kind in the world, opening or closing in just five minutes. The redevelopment was completed prior to the 2015 Australian Open. The arena is also used for regular music concerts and is one of the two home courts of Super Netball team the Melbourne Vixens.

Conjecture over the name of the arena has caused significant debate in Australian society. Named in honour of Margaret Court, statistically Australia's greatest Grand Slam singles player, Court has sparked controversy over her public views on LGBT issues. As recently as 2017 there were calls from several public figures for the arena's name to be changed.

In April 2019 construction of the Show Court Arena (working title) commenced on the site of the old Eastern Courts 16-23, between Rod Laver and John Cain Arenas. The open-air arena is partially sunken into the ground and has a roof structure capable of protecting most of the spectators from the extremities, however unlike the larger arenas it does not have a retractable roof capable of being shut during inclement weather. Construction of the arena was the signature element of the $271.5 third stage of redevelopments of Melbourne Park and will be completed in time for the 2022 Australian Open. The arena will seat 5,000 spectators. 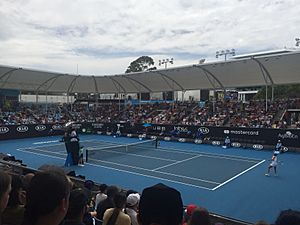 Aside from a further 35 match day and practice courts, many of which have temporary standing of up to 2,500 capacity attached to them for the Australian Open, there are two Show Courts at Melbourne Park, Show Court 2 (known for commercial purposes as the 1573 Arena) and Show Court 3, each with a permanent seating capacity of approximately 3,000. Like all the other tennis courts at Melbourne Park, these show courts remain as tennis courts throughout the year and are available for use by the general public. The remaining courts at Melbourne Park are outdoor courts located mostly on the western side of the precinct closer to Birrarung Marr. They have seating of anywhere from 50 to 2,500 installed for the Australian Open. 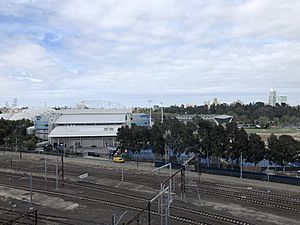 A view of Melbourne Park from the Melbourne Cricket Ground.

The Melbourne Park Master Plan has been the process by which the precinct has undergone three significant stages of redevelopment since 2010. The Stage 1 redevelopment included the construction of a new Eastern Plaza to host an elite tennis training facility and a new bridge linking Melbourne Park to the nearby AAMI Park stadium and Olympic Park Oval, as well as an upgrade to Margaret Court Arena. The Eastern Plaza Tennis Training Facility, which was later named the National Tennis Centre and features eight indoor and 13 outdoor courts (including eight European-style clay courts) was unveiled in January 2013. Margaret Court Arena (which had its seating capacity expanded to 7,500 and a retractable roof installed) was opened ahead of the 2015 Australian Open. The cost of the Stage 1 redevelopment was $366 million.

Stage 2 of the redevelopment began in June 2015, when it was announced that Rod Laver Arena would undergo a redevelopment of its exterior facade and interior features, such as bars and other player facilities. The broader second stage upgrade included a new footbridge linking Melbourne Park and Birrarung Marr and an Administration and Media Building, to house Tennis Australia and Melbourne & Olympic Parks Trust headquarters. The new footbridge, named Tanderrum Bridge, was unveiled in December 2016 and the Administration and Media Building was completed two months earlier. The Rod Laver Arena refurbishment, which included a new four-level training and leisure facility for athletes at the Australian Open, was completed by in December 2018. Rod Laver Arena's retractable roof was also upgraded to allow for it to be closed for inclement weather in five minutes, dropping from the 30 minutes it took to close beforehand. The Stage 2 redevelopment cost $338 million and was fully completed in September 2019.

The final phase of redevelopment (Stage 3) was announced in April 2017 by the Victorian Government. A further $271.3 million was invested to complete upgrades for Melbourne Park. The third stage features:

Construction of this stage began in April 2019. Overall, a total of $972 million was spent on the multi-year redevelopment of the Melbourne Park precinct. Completion of all works at the precinct is anticipated in time for 2023 Australian Open.

Melbourne Park is adjacent to the Melbourne Cricket Ground in Yarra Park, and there are several pedestrian bridges linking the two across the separating railway lines. The park is five minutes walk from Richmond and Jolimont railway stations, and five minutes from the city centre by tram (route 70) or ten minutes on foot.

All content from Kiddle encyclopedia articles (including the article images and facts) can be freely used under Attribution-ShareAlike license, unless stated otherwise. Cite this article:
Melbourne Park Facts for Kids. Kiddle Encyclopedia.