Francesca Schiavone ( born 23 June 1980) is a retired Italian tennis player. She turned professional in 1998 and won the 2010 French Open singles title, becoming the first Italian woman to win a Grand Slam event in singles. She was also runner-up at the 2011 French Open. Her career-high ranking is world No. 4, achieved on 31 January 2011. To date, Schiavone is the last one-handed-backhand player to win a Grand Slam title on the women's tour.

She won eight WTA singles titles in total, including Roland Garros. In doubles, her career-high ranking is world No. 8, peaking with an appearance in the final of the 2008 French Open. Furthermore, she helped Italy to win the Fed Cup in 2006, 2009 and 2010, and has the most wins for the Italian team.

Schiavone played in the longest ever women's singles match at a Grand Slam tournament, when she defeated Svetlana Kuznetsova 6–4, 1–6, 16–14 in the fourth round of the 2011 Australian Open women's singles draw, the match lasted 4 hours and 44 minutes and in the process secured her first and only quarterfinal at the Australian Open.

On 5 September 2018, Schiavone announced her retirement from tennis at the US Open. During the announcement, she shared aspirations of winning a Grand Slam as a coach. In April 2021, Schiavone began coaching Petra Martić.

Schiavone employs an all-court game and has a very classic approach to her clay game. She uses an extreme eastern grip on her one-handed backhand. Chris Fowler and Brad Gilbert described her forehand as a "buggy whip."

Schiavone won eight singles titles on the WTA Tour and also achieved eleven runner-up positions, eight of them since the autumn of 2005. She lost her first eight career finals before finally winning her first title in July 2007. She and her Italian teammates Mara Santangelo, Flavia Pennetta and Roberta Vinci beat the Belgian team 3–2 in the 2006 Fed Cup final. Justine Henin had to retire in the fifth and final match due to an injury in her right knee, which let Italy win their first Fed Cup trophy. This match was a doubles match and Kirsten Flipkens partnered Henin, and Roberta Vinci partnered Schiavone. In 2009, she won the Fed Cup with Italy for the second time against the US, and also made the quarterfinals of Wimbledon for the first time. In 2010, Italy with Schiavone won the Fed Cup for the third time.

In addition, she realized a notable victory during the quarterfinals of the 2008 Dubai Open, when she upset world No. 1 and four-time champion Henin 7–6, 7–6. She also beat Amélie Mauresmo in a Fed Cup tie in 2006 when Mauresmo was ranked No. 1.

Partnering with Australian Casey Dellacqua, Schiavone was the runner-up in the women's doubles competition at the 2008 French Open where they lost to Anabel Medina Garrigues and Virginia Ruano Pascual. Schiavone also reached the semifinals of the doubles event at the other three Grand Slam tournaments.

Seeded 17th entering the French Open, Schiavone was lightly regarded as a contender for the championship. She defeated Regina Kulikova, Sophie Ferguson, 11th seed Li Na, and 30th seed Maria Kirilenko to reach her first French Open quarterfinal since 2001 (where she had lost to Martina Hingis). There, she defeated world No. 3, Caroline Wozniacki, in straight sets to become the first Italian woman to reach the semifinals of a Grand Slam singles event.

The semifinals of the French Open consisted of four players (Jelena Janković, Elena Dementieva, Samantha Stosur and Schiavone) who had never won a Grand Slam singles event; nevertheless, most in the tennis community, including ESPN's tennis commentary team of Mary Joe Fernández, Patrick McEnroe, and Brad Gilbert singled out Schiavone as the one player who was not a serious contender to win the title. In the semifinals, Schiavone defeated world No. 5 and 2004 finalist, Dementieva (she retired in the second set with a torn calf muscle having lost the first set in a tiebreaker), and the victory made Schiavone the first Italian woman to reach a Grand Slam final, and assured that she would become a top-ten player for the first time following the tournament.

In the final, Schiavone faced Stosur in a rematch of their first-round meeting at the 2009 French Open which Stosur had won easily (6–4, 6–2). Because of this previous result, and Stosur's victories over four-time French Open champion Justine Henin, world No. 1 Serena Williams and world No. 4 Janković en route to the final, Stosur was considered a heavy favorite. However, on 5 June 2010, Schiavone defied expectations to become the first Italian woman to win a Grand Slam singles title, beating Stosur 6–4, 7–6. The victory made her only the third Italian player to win a Grand Slam event in singles, after Nicola Pietrangeli and Adriano Panatta. She also became the oldest woman to win a first Grand Slam title in the Open Era, beating the previous record by Jana Novotná. The victory also meant she rose to No. 6 in the world rankings on 7 June 2010 and became the highest-ranked Italian woman ever, after Flavia Pennetta reached world No. 10 in 2009.

Schiavone's next event was Eastbourne, where she lost in the first round to Sorana Cîrstea, 5–7, 3–6. As the fifth seed at Wimbledon, due to the pre-tournament withdrawal of Dementieva, she lost to Vera Dushevina in the first round, 7–6, 5–7, 1–6.

Schiavone reached the quarterfinals of the Rogers Cup, where she fell to top seed Caroline Wozniacki. She was the sixth seed at the US Open, and defeated Ayumi Morita, Maria Elena Camerin, 29th seed Alona Bondarenko, and 20th seed Anastasia Pavlyuchenkova to advance to the quarterfinals for the first time since 2003 (where she had lost to Jennifer Capriati). In the quarterfinals, she fell to seven-time Grand Slam singles champion No. 3 seed Venus Williams 6–7, 4–6.

As the fifth seed, Schiavone reached the semifinals of the Pan Pacific Open, where she fell to seventh seed Elena Dementieva. At the season-ending Tour Championships, Schiavone competed for the first time in her career but was eliminated in the round-robin stage. She fell to Caroline Wozniacki in three sets, and Sam Stosur in two sets before defeating Elena Dementieva in what would be Dementieva's final career match.

Schiavone began the year at the Hopman Cup representing Italy. In singles, she defeated Laura Robson, but fell to Bethanie Mattek-Sands. Schiavone retired with an injury against Kristina Mladenovic.

Seeded sixth at the Australian Open, Schiavone advanced to the quarterfinals for the first time in her career upon a victory over 23rd-seeded and two-time Grand Slam champion Svetlana Kuznetsova. The fourth-round encounter lasted nearly five hours (4:44; 47 games in total), and Schiavone saved six match points before finally prevailing 6–4, 1–6, 16–14. With this win, Schiavone rose in the rankings to world No. 4 after the tournament, the highest ranking ever achieved by an Italian woman, improving her own record. In the quarterfinal against world No. 1, Caroline Wozniacki, Schiavone was a set and 3–1 up in the second set, but was broken twice by Wozniacki in the same set and twice in the third, to lose 6–3, 3–6, 3–6 after saving three match points.

Schiavone began her clay-court season with a round of 16 loss to Radwańska at the Porsche Tennis Grand Prix. She then reached the round of 16 at the Mutua Madrid Open, falling to Mattek-Sands. Following Madrid, Schiavone reached the quarterfinals of the Internazionali BNL d'Italia, losing to world No. 7, Sam Stosur, in a rematch of the 2010 French Open final. She then lost to world No. 1, Caroline Wozniacki, in three sets during the semifinals of the Brussels Open, the last tournament before the French Open.

She then switched to the grass courts, falling to Agnieszka Radwańska at the Aegon International in her only Wimbledon warmup. She was the sixth seed at the Wimbledon Championships, losing in the third round to Tamira Paszek of Austria.

During the Rogers Cup, Schiavone won her opening-round match against Ekaterina Makarova but fell in the third round to Lucie Šafářová.

The Western & Southern Open saw another early round loss for Schiavone. It took her three sets to defeat Maria Kirilenko in her opening round match. She then lost to former world No. 1, Jelena Janković, in a third round three-setter.

Just before the US Open Schiavone entered the New Haven Open. She defeated Alexandra Dulgheru and Monica Niculescu in the first two rounds. Her quarterfinal match against Anabel Medina Garrigues was a walkover. Schiavone was defeated by Wozniacki in straight sets in the semifinals.

At the US Open, she reached the fourth round where she lost to Anastasia Pavlyuchenkova. At the China Open Schiavone emerged victorious in the first round against Bojana Jovanovski but was then defeated in the second round by Dominika Cibulková. 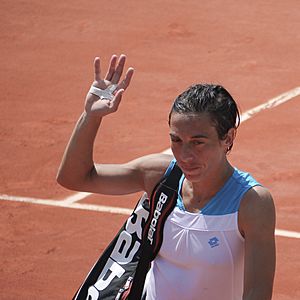 Schiavone at the 2012 French Open

Schiavone began the season at the Brisbane International. Seeded third, she reached the semifinal where she lost to eventual champion Kaia Kanepi.

Schiavone struggled whilst representing Italy at Fed Cup versus Ukraine, losing to a non-top-100 player Lesia Tsurenko comprehensively 1–6, 2–6 and barely getting past Kateryna Bondarenko, 6–7, 7–5, 6–4. Despite her struggles, Italy still managed to progress through to the semifinals.

Schiavone played in the mini gulf series in Doha and Dubai losing early in both of them as the seventh seed; Doha in the second round to Yanina Wickmayer 4–6, 6–7 and in her Dubai opener to Ana Ivanovic 1–6, 5–7.

At the BNP Paribas Open in Indian Wells, she (as 10th seed) avenged her Fed Cup loss by beating Lesia Tsurenko, 6–2, 6–4, before retiring against Lucie Šafářová in the third round after losing the first set 6–2. With the same seeding in Miami, she lost to Ksenia Pervak 4–6, 6–4, 4–7 in her opener, blowing a 3–0 final-set lead.

After lackluster results, the clay-court season was a chance for Schiavone to get back on form on her favorite surface, but as the top seed at the Barcelona Ladies Open, her poor form continued as she lost to Olga Govorstova, 4–6, 3–6 in her opening match. She represented Italy in Fed Cup semifinals against Czech Republic, losing both of her matches to Lucie Šafářová, 6–7, 1–6, and to Petra Kvitová, 4–6, 6–7. Italy lost the tie 1–4. After passing her opening round in Stuttgart against Monica Niculescu, she lost in the second round to No. 3 seed Petra Kvitová, 2–6, 2–6. She also lost her opener in Madrid to Varvara Lepchenko and Rome to Ekaterina Makarova. However, Schiavone finally found some form going into the French Open, winning Strasbourg by defeating Sloane Stephens and Alizé Cornet in the semifinals and finals, respectively.

Schiavone reached the third round of French Open, where she lost to Varvara Lepchenko, 6–3, 3–6, 6–8.

At Wimbledon she reached the fourth round before losing to Petra Kvitová in three sets, but managed to reach the semifinals in doubles with partner Flavia Pennetta. Schaivone won her opening match at the Olympics and was then ousted in the second round by Vera Zvonareva.

Seeded 22nd, Schiavone faced off against Sloane Stephens in the first round of the US Open and lost in straight sets. Schiavone then competed at the Toray Pan Pacific Open where she defeated Yaroslava Shvedova in the first round but then lost to Sam Stosur. She then suffered three consecutive first-round losses to Li Na at Beijing, to Olga Puchkova at Osaka and to Urszula Radwańska at Moscow.

All content from Kiddle encyclopedia articles (including the article images and facts) can be freely used under Attribution-ShareAlike license, unless stated otherwise. Cite this article:
Francesca Schiavone Facts for Kids. Kiddle Encyclopedia.