Justine Henin (born 1 June 1982), is a Belgian former professional tennis player known for her all-court style of play and notably being one of the few female players to use a single-handed backhand. She spent a total of 117 weeks as the world No. 1 and was the year-end No. 1 in 2003, 2006 and 2007.

She also won a gold medal in the women's singles at the 2004 Olympic Games and won the year-ending WTA Tour Championships in 2006 and 2007. In total, she won 43 WTA singles titles.

Tennis experts cite her mental toughness, the completeness and variety of her game, her foot-speed and footwork, and her one-handed backhand (which John McEnroe described as "the best single-handed backhand in both the women's or men's game") as the principal reasons for her success.

She retired from professional tennis on 26 January 2011, due to a chronic elbow injury. In June 2011, she was named one of the "30 Legends of Women's Tennis: Past, Present and Future" by Time. She is widely considered one of the greatest female tennis players of all time. In 2016, she became the first Belgian tennis player inducted into the International Tennis Hall of Fame. 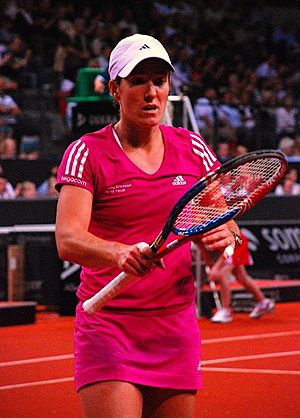 At the 2007 French Open, Martina Navratilova said that "Henin's offense is just phenomenal, it's sort of like we've got 'the female Federer', or maybe the guys have 'the male Justine Henin', because she is just head and shoulders above everyone else right now."

Despite her relatively small size, Henin was capable of producing powerful first serves, her fastest one being clocked at 196 km/h (122 mph) at the 2005 Family Circle Cup. Henin's single-handed backhand was the most powerful and accurate in the game. Her forehand was generally regarded as her most dangerous weapon, and the stroke that she normally used to dictate play in a match. Like her serve, her forehand took inspiration from Andre Agassi's forehand.

A notable aspect of Henin's playing style was the completeness of her game – the variety and versatility she had. Her style was often compared to that of Roger Federer and to five-time Grand Slam winner Martina Hingis as well. Four-time Grand Slam winner Kim Clijsters commented "Growing up together, she's always been the more touchy player. She has good hands ... she has those quick hands." Former world No. 1 Andy Roddick praised Henin's and Hingis' racket skills, saying "She has probably the best racket skills of any female player I’ve seen".

Henin had always been considered one of the better volleyers on tour, but soon established herself as one of the best in the modern era. Renowned tennis coach Nick Bollettieri included Henin as one of the few female tennis players he regarded as being a successful volleyer and an adept serve-and-volleyer, alongside the likes of Martina Navratilova and Jana Novotná. 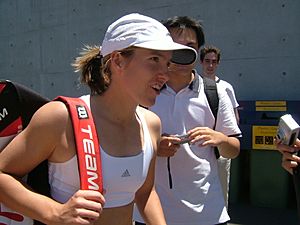 Henin has worn apparel manufactured by Adidas and used Wilson racquets for her tournaments.

In May 2007, Henin and her coach Carlos Rodríguez started the Academy 6th Sense. At the 2009 US Open – Girls' Doubles the Ukrainian tennis player Maryna Zanevska became the first "6th Sense player" to win a Grand Slam title. On 30 November 2007, Henin opened her own tennis academy Club Justine N1 (in French, "N1" is pronounced almost identically to "Henin").

After retiring, Henin became involved in two Belgian reality shows in 2009. In May, she starred in De Twaalf Werken van Justine Henin – Les 12 travaux de Justine Henin (The 12 Labours of Justine Henin). The show followed Henin as she completed 12 personal challenges. In June 2009, she hosted a musical TV show that revolved around Belgian-Italian singer Lara Fabian.

All content from Kiddle encyclopedia articles (including the article images and facts) can be freely used under Attribution-ShareAlike license, unless stated otherwise. Cite this article:
Justine Henin Facts for Kids. Kiddle Encyclopedia.