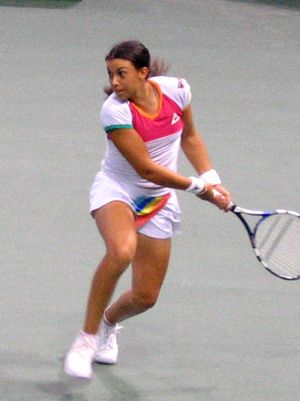 In 2007, she played in the Wimbledon final against Venus Williams, after winning against the World Number 1 Justine Henin in the semi-finals. It was considered one of the biggest shocks in Wimbledon history. Bartoli lost against Williams in the final, finishing as runner-up. Bartoli won the Wimbledon singles in 2013.

Bartoli retired in August 2013 due to pain from injuries. She lives in Geneva in Switzerland.

Bartoli in the Wimbledon final

All content from Kiddle encyclopedia articles (including the article images and facts) can be freely used under Attribution-ShareAlike license, unless stated otherwise. Cite this article:
Marion Bartoli Facts for Kids. Kiddle Encyclopedia.