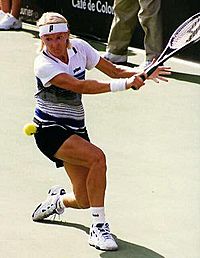 Novotna was born in Brno, Czechoslovakia (now Czech Republic). She played a serve and volley game among women during her career. She won the women's singles title at Wimbledon in 1998 and was runner-up in three previous Grand Slam tournaments. She won a silver medal in doubles at the 1988 Summer Olympics. She won the silver medal in doubles and the bronze medal in singles at the 1996 Summer Olympics. Novotná also won 12 Grand Slam women's doubles titles and four mixed doubles titles. She reached a career-high singles ranking of world No. 2 in 1997, and achieved the No. 1 ranking in doubles. Novotná retired from the professional tour in 1999.

Novotná died of cancer in Brno on 19 November 2017 at the age of 49. She was in a relationship with Polish tennis player Iwona Kuczynska until her death.

All content from Kiddle encyclopedia articles (including the article images and facts) can be freely used under Attribution-ShareAlike license, unless stated otherwise. Cite this article:
Jana Novotná Facts for Kids. Kiddle Encyclopedia.