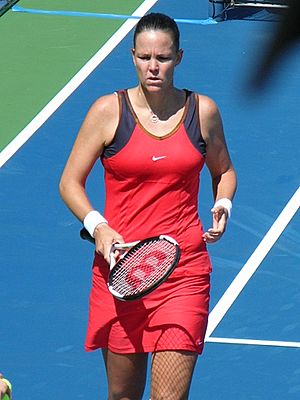 Lindsay Ann Davenport (born June 8, 1976 in Palos Verdes, California) is a former World No. 1 American professional tennis player. She has won three Grand Slam singles tournaments, three Grand Slam doubles tournaments and, in 1996, an Olympic gold medal in singles. She is one of only four women (the others being Steffi Graf, Martina Navratilova, and Chris Evert) since 1975 who has been the year-end World No. 1 at least four times. Davenport finished 1998, 2001, 2004, and 2005 as the top ranked player.

She is a daughter of Wink Davenport.

All content from Kiddle encyclopedia articles (including the article images and facts) can be freely used under Attribution-ShareAlike license, unless stated otherwise. Cite this article:
Lindsay Davenport Facts for Kids. Kiddle Encyclopedia.