Kim Antonie Lode Clijsters (born 8 June 1983) is a Belgian former professional tennis player. Clijsters was a world No. 1 in both singles and doubles, having held both rankings simultaneously in 2003. She won a total of six Grand Slam tournament titles, four in singles and two in doubles.

Clijsters competed professionally from 1997 to 2012 in an era where her primary rivals were compatriot Justine Henin and 23-time Grand Slam singles champion Serena Williams. Coming from a country with limited success in men's or women's tennis, Clijsters became the first Belgian player to attain the No. 1 ranking. Together with Henin, she established Belgium as a leading force in women's tennis as the two of them led their country to their first Fed Cup crown in 2001 and were the top two players in the world in late 2003.

Individually, Clijsters won 41 singles titles and 11 doubles titles on the Women's Tennis Association (WTA) Tour. She was a three-time winner of the WTA Tour Championships. Between singles and doubles, she was a champion at all four Grand Slam tournaments, winning the US Open and the Australian Open in singles and Wimbledon and the French Open in doubles with Ai Sugiyama. Her success at majors was highlighted by winning three consecutive appearances at the US Open. 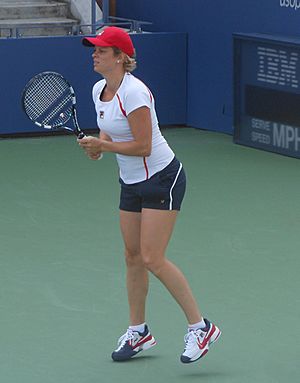 Plagued by injuries and having lost some of her desire to compete, Clijsters initially retired from tennis in 2007 at the age of 23 to get married and have a daughter. She returned to the sport two years later and won her second US Open title as an unranked player in just her third tournament back. She defended her title the following year and then won the Australian Open.

Along with Margaret Court, she also holds the record for most Grand Slam singles titles won as a mother with three and was the first to win one since Evonne Goolagong Cawley in 1980. She officially retired from professional tennis after the 2012 US Open.

Clijsters was born to athletic parents with backgrounds in professional football and gymnastics. She was renowned for her athleticism, which was highlighted by her ability to perform splits on court in the middle of points. She built the offensive side of her game around controlled aggression while also using her exceptional movement to become an elite defensive player.

Clijsters was very popular and well-liked as a player, having won the Karen Krantzcke Sportsmanship Award eight times. She was inducted into the International Tennis Hall of Fame in 2017.

All content from Kiddle encyclopedia articles (including the article images and facts) can be freely used under Attribution-ShareAlike license, unless stated otherwise. Cite this article:
Kim Clijsters Facts for Kids. Kiddle Encyclopedia.