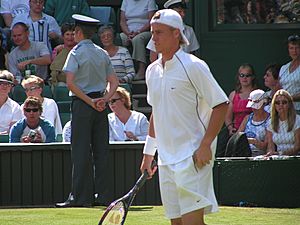 Lleyton Hewitt at Wimbledon in 2004

Hewitt was ranked the No.1 in the world and was the youngest ever male player to reach this rank. He played for Australia in the Davis Cup. In August 2000, the Australian Government gave him the Australian Sports Medal. Hewitt won the US Open in 2001 and the Wimbledon Championships in 2002.

This table shows Hewitt's performance in each Grand Slam tournament in singles.

All content from Kiddle encyclopedia articles (including the article images and facts) can be freely used under Attribution-ShareAlike license, unless stated otherwise. Cite this article:
Lleyton Hewitt Facts for Kids. Kiddle Encyclopedia.