Juan Carlos Ferrero Donat (born 12 February 1980) is a Spanish former world No. 1 professional tennis player. He won the men's singles title at the 2003 French Open, and in September of that year, became the 21st player to hold the world No. 1 ranking. He was also runner-up at the 2002 French Open and 2003 US Open. His nickname was "Mosquito" due to his speed and slight physical build. Ferrero retired from the game after the 2012 Valencia Open 500, returning for a brief doubles stint in 2017.

In July 2017, Ferrero started working as a coach of then-No. 11 Alexander Zverev. The work ended in February 2018 due to several differences between both of them. 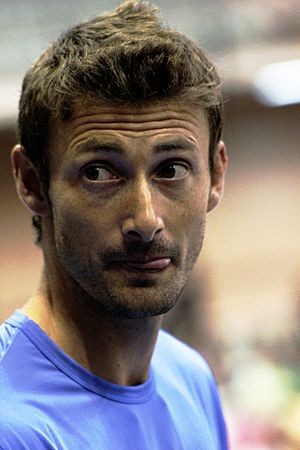 Nicknamed Juanki and "El Mosquito", Ferrero began playing tennis at age seven with his father, Eduardo, who often travels with him. He admires the play of former No. 1 and two-time Roland Garros champion Jim Courier. Ferrero's inspiration has been his mother, Rosario, who died of cancer when he was 17.

In July 2007, he bought an old cottage in Bocairente, 50 minutes south from Valencia and refurbished it into "Hotel Ferrero", which features 12 luxury suites. He is also a joint owner of the Valencia Open 500 tournament together with David Ferrer. His fitness trainer was Miguel Maeso, and he was coached by Antonio Martínez (after 1989) and Salvador Navarro (after May 2008).

He and his wife welcomed their first child, a baby daughter in September 2014, and the couple married in July 2015.

Born in Ontinyent, Ferrero came to prominence in 1998, making the final of the French Open Juniors, losing to Fernando González. He finished the year ranked as the No. 17 junior. He then made his professional debut in 1998 by reaching the finals of his first Futures tournament in Italy, losing to Miguel Pastura, 4–6, 5–7. He won two Futures events in Spain, defeating Gorka Fraile and Emilio Viuda-Hernandez in the respective finals. He ended the year ranked No. 345. 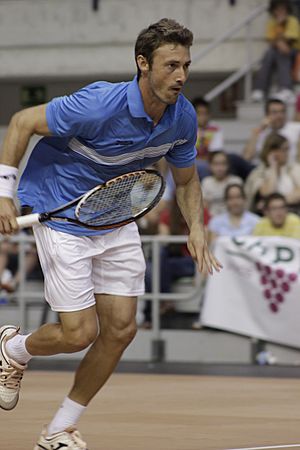 Although Ferrero was known as one of the best clay-court players during his prime, he distinguished himself as an all-court and all-round player through his solid performance on hard- and grass-court tournaments. He said during an interview that he preferred playing on hard courts. Tennis experts agreed that Ferrero's clay-court game translated well to the hard court due to his aggressive style of playing. He also had one of the greatest forehands in the game and immense speed on the court.

He was sponsored by Nike, Sergio Tacchini, and Lotto Sport Italia for his apparel on court. In 2010, he signed an endorsement deal with Joma. He uses Lacoste (since 2012) for his clothes, Asics for shoes and Prince Sports for his racquets. He played with a Prince EXO3 Tour 100 Mid+ (16x18) racquet.

All content from Kiddle encyclopedia articles (including the article images and facts) can be freely used under Attribution-ShareAlike license, unless stated otherwise. Cite this article:
Juan Carlos Ferrero Facts for Kids. Kiddle Encyclopedia.