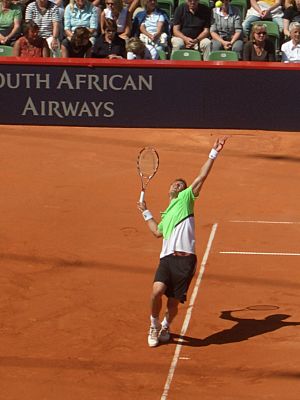 Marat Safin at the 2008 Hamburg masters

Marat Safin is a retired professional tennis player from Russia. He was once ranked number 1 in the world. In 2000 and 2005, Safin won the US Open and the Australian Open, respectively. In 2002 and 2004, Safin played in the last round of the Australian Open, but lost. In 2008, Safin became the first Russian man to play in the semifinals in the Wimbledon Championships. Born to a Tatar family, he learned how to play tennis in Spain when he was a teenager.

All content from Kiddle encyclopedia articles (including the article images and facts) can be freely used under Attribution-ShareAlike license, unless stated otherwise. Cite this article:
Marat Safin Facts for Kids. Kiddle Encyclopedia.