Juan Martín del Potro (born 23 September 1988), nicknamed Delpo, is an Argentine professional tennis player who is currently ranked world No. 4 in men's singles by the Association of Tennis Professionals (ATP).

His biggest achievement has been winning the 2009 US Open, defeating Rafael Nadal in the semifinal and 5-time defending champion Roger Federer in the final. He was the first to defeat both Federer and Nadal during the same major and was the only man outside the Big Four to win a major between the 2005 French Open and the 2013 US Open, a span of 35 tournaments. He is also the second Argentine and the fifth-youngest man to win the US Open in the Open Era.

Del Potro achieved a top-10 ranking by the Association of Tennis Professionals (ATP) for the first time on 6 October 2008. In January 2010, he reached a ranking of world No. 4, after which del Potro had to withdraw from most of the tournaments in 2010 due to a right wrist injury. He returned in 2011 and was back to world No. 4 in January 2014 but had to withdraw from competition due to another wrist injury, but this time to his left wrist.

Having started playing tennis at the age of seven, del Potro won his first senior match (ITF level) in 2004 at the age of 15. At the start of the 2006 season, at 17 years of age he notched his first ATP Tour match win. In 2008, he became the first player in ATP history to win his first four career titles in as many tournaments. He also completed the second-longest winning streak in 2008, and the second longest by a teenager in the Open Era. 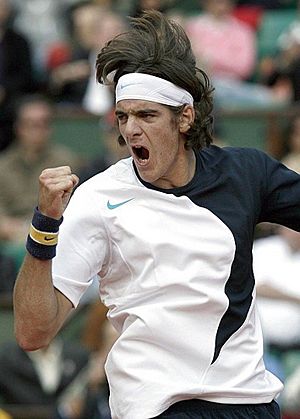 Juan Martín del Potro was born in Tandil, Argentina. His father, Daniel del Potro, played semi-professional rugby union in Argentina and is a veterinarian. His mother, Patricia Lucas, is a teacher and he has a younger siste. He also had an elder sister who died when she was 8 years old in a car accident. Del Potro speaks Spanish, English and some Italian.

Aside from tennis, he enjoys playing association football and supports the Boca Juniors team in Argentina and Juventus in Italy. He would often dedicate time to both sports during his youth, and Argentine-Italian international footballer Mauro Camoranesi, who grew up in the same town, remains a close friend of del Potro.

Del Potro began playing tennis at the age of seven with coach Marcelo Gómez. Del Potro's talent was discovered by Italian ex-tennis professional Ugo Colombini, who accompanied him through the initial phases of his young career, and is still today his agent and close friend.

As a junior, del Potro reached as high as No. 3 in the combined junior world rankings in January 2005.

Del Potro is an offensive baseliner with a very powerful serve and deep, flat, topspin groundstroke. His forehand is one of his main strengths and possibly the most powerful in the game, capable of frequently generating speeds more than 160 km/h. It is widely considered among the top three best forehands on tour by fellow players and analysts, alongside Roger Federer and Rafael Nadal.

Although he possessed a very consistent and powerful double-handed backhand, injury and surgeries on his wrist have rendered his backhand the main weakness in his game. Since his return in 2016, del Potro made tactical changes in his game in order to protect his wrist. To compensate for the newfound vulnerability in his backhand wing, del Potro has improved the power and accuracy of his other shots, most notably his serve. 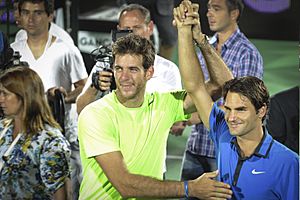 Del Potro used the Wilson Hyper ProStaff 6.1 Midplus Stretch early on in his career, and has continued to use this racquet. Del Potro is very superstitious, and after suffering a wrist injury shortly after switching to the Wilson BLX Pro Tour paint job in 2010, he returned to playing with the then outdated Wilson K-Factor 6.1 95 paint job.

His clothing sponsor is Nike. He used to wear sleeveless shirts, but more recently has worn crew shirts, and often also sports double-wide wristbands and a bandana. For shoes, he wears Nike Air Max Cages.

All content from Kiddle encyclopedia articles (including the article images and facts) can be freely used under Attribution-ShareAlike license, unless stated otherwise. Cite this article:
Juan Martín del Potro Facts for Kids. Kiddle Encyclopedia.