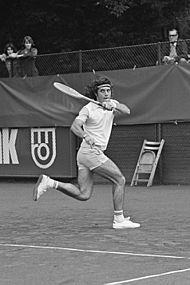 Guillermo Vilas at the 1974 Dutch Open

Guillermo Vilas ( born 17 August 1952), also known as Willy Vilas, is an Argentine former professional tennis player, No. 1 of the Grand Prix seasons in 1974, 1975 and 1977, who won four Grand Slam tournaments, one year-end Masters, nine Grand Prix Super Series titles and 62 total ATP titles. World Tennis, Agence France-Presse and Livre d'or du tennis 1977 (Christian Collin-Bernard Ficot), among other rankings and publications, rated him as world No. 1 in 1977 (while others ranked Björn Borg or Jimmy Connors No. 1). In the ATP computer rankings, he peaked at No. 2 in April 1975, a position that he held for a total of 83 weeks. He was inducted into the International Tennis Hall of Fame in 1991, two years after his first retirement.

Known for his prolific match play, especially on clay, he became the second man to win more than 900 matches in the Open Era, and his number of match-wins on clay (659) is by far the most of the era. His peak was the 1977 season during which he won two major titles (both on clay), had two long match win streaks of 46 all-surface and 53 on clay, and finished with an Open Era record of match wins. In 2016, The Daily Telegraph ranked him as the 3rd best male clay-court player of all time, behind Rafael Nadal and Björn Borg. In 2018, Steve Tignor for Tennis Magazine ranked him as the 16th greatest tennis player of the Open Era.

Historical and statistical studies presented in 2015 by Argentinian journalist Eduardo Puppo and Romanian mathematician Marian Ciulpan concluded that Vilas should have been No. 1 in the old ATP ranking system for seven weeks between 1975 and 1976. The ATP Tour and its chief executive at that time, Chris Kermode, although not refuting the data, decided not to officially recognize Vilas. The controversy is still in the legal stage. In October 2020, Netflix released a documentary film about the Vilas case titled "Guillermo Vilas: Settling the Score".

Raised in the seaside resort of Mar del Plata, Vilas was a left-hander and played his first tour event in 1968. He was in the year-ending top ten from 1974 through 1982. He was a clay-court specialist but also played well on hard-court, grass, and carpet surfaces.

A left-handed baseliner, Vilas's best year on tour was 1977 when he won two of the four Grand Slam singles tournaments and 16 of the 31 Association of Tennis Professionals tournaments he entered. His playing record for 1977 was 130 wins against 15 losses. Not including the Masters year-end championship, he won 72 of his last 73 ATP matches in 1977. The highest point during this phenomenal run was winning the last US Open played at Forest Hills against Jimmy Connors 2–6, 6–3, 7–6(7–4), 6–0 in a match where Vilas surprised his American rival by attacking the net.

In 1977 he won seven consecutive titles after Wimbledon—Kitzbühel (clay), Washington (clay), Louisville (clay), South Orange (clay), Columbus (clay), US Open (clay) and Paris (clay)—and set up a 46-match all-surface winning streak. He also had a record 53-match winning streak on clay courts, which stood until surpassed by Rafael Nadal in 2006. Both his winning streaks were terminated in October 1977 by Ilie Năstase in the final of the Raquette d'Or tournament. In that best of five-set final, Vilas dropped the first two sets by 6–1, 7–5 and then retired in protest of Năstase's use of a spaghetti strung racquet (which was banned shortly after by the ITF). After that he won a further 28 matches in a row with titles at Tehran, Bogotá, Santiago, Buenos Aires (all on clay), and Johannesburg (hard). That run was ended in the Masters semi-finals by Björn Borg.

Vilas retired from the ATP Tour in 1989 but still played on the ATP Challenger Series until 1992. He was inducted into the International Tennis Hall of Fame in 1991. Vilas was in the stands at Flushing Meadows to cheer on his countryman, Juan Martín del Potro, who beat Roger Federer in an upset in the 2009 US Open final. 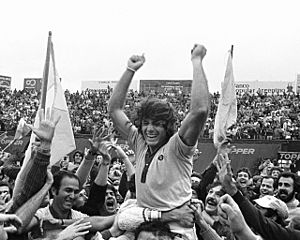 Vilas after winning the Buenos Aires Open and securing the first place in the 1977 Grand Prix Circuit. 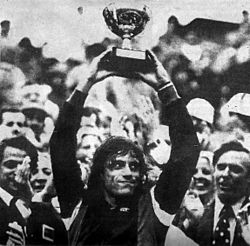 Vilas celebrating his win at the 1977 French Open.

All content from Kiddle encyclopedia articles (including the article images and facts) can be freely used under Attribution-ShareAlike license, unless stated otherwise. Cite this article:
Guillermo Vilas Facts for Kids. Kiddle Encyclopedia.