Current owner Larry Ellison, CTO and co-founder of Oracle, purchased the tournament and the Indian Wells Tennis Garden in December 2009. 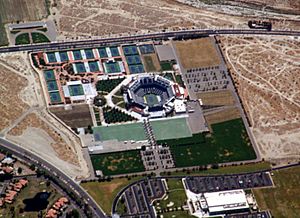 Between 1974 and 1990 it was a major tournament of the Grand Prix Tennis Tour and part of the Grand Prix Super Series. The event, held in March, is one of two tour events (along with the Miami Open), other than the Majors, in which main draw play extends beyond eight days.

The women's main draw usually starts on Wednesday and the men's main draw starts on Thursday. Both finals are held on Sunday of the following week. Both singles main draws include 96 players in a 128-player grid, with the 32 seeded players getting a bye (a free pass) to the second round.

The tournament is played on hard courts and is the best-attended tennis tournament outside the four Grand Slam tournaments, with over 450,000 visitors during the 2015 event. It has the second-largest permanent tennis stadium in the world (the Arthur Ashe stadium being the largest).

All content from Kiddle encyclopedia articles (including the article images and facts) can be freely used under Attribution-ShareAlike license, unless stated otherwise. Cite this article:
Indian Wells Masters Facts for Kids. Kiddle Encyclopedia.