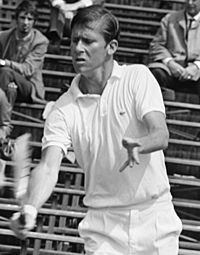 Richard Dennis Ralston (July 27, 1942 – December 6, 2020) was an American professional tennis player. He was active during the 1960s and 1970s. Ralston was born in Bakersfield, California. He was coached by tennis pro Pancho Gonzales. He was the highest-ranked American player at the end of three consecutive years in the 1960s.

Ralston was honored into the International Tennis Hall of Fame in 1987.

All content from Kiddle encyclopedia articles (including the article images and facts) can be freely used under Attribution-ShareAlike license, unless stated otherwise. Cite this article:
Dennis Ralston Facts for Kids. Kiddle Encyclopedia.