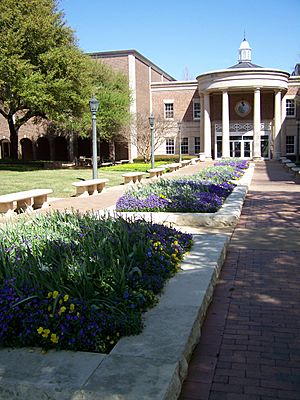 Founded on April 17, 1911 by the Methodist Episcopal Church, South of what is now the United Methodist Church in partnership with Dallas civic leaders. As of the Fall 2019 semester, the university's 11,824 students are 6,710 undergraduates and 5,114 postgraduates from all 50 states and 85 countries, with a gender distribution of 51 percent male students and 49 percent female students. It instructional faculty is 1,151 with 754 being full time and 397 being part time as of fall 2019.

All content from Kiddle encyclopedia articles (including the article images and facts) can be freely used under Attribution-ShareAlike license, unless stated otherwise. Cite this article:
Southern Methodist University Facts for Kids. Kiddle Encyclopedia.