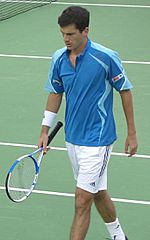 Henman at the Australian Open in 2006

He reached the semi finals of Wimbledon many times, the first British tennis player to do so since the 1970s. He reached six grand slam semi finals and won eleven titles in his career. He once was ranked number four in the world. He was sponsored by Adidas and Slazenger. He retired in 2007 as England's most successful tennis player of the last twenty years.

Henman got 10 GCSEs at school and went into tennis training afterwards. He was told by doctors he had a type of bone disease in 1992. He carried on playing tennis anyway and he became professional aged 18 in 1992. In 1999 Henman married his long term girlfriend Lucy Heald. The couple have three daughters: Rose, Olivia and Grace.

Henman moved up the rankings very fast. By 1994, one year after becoming professional, he was 200th in the world. By 1996 he was in the top thirty. In 1995 he became the first player ever to be disqualified from the Wimbledon tournament. Because he was angry during a match he hit the ball very hard at a ball girl and it hit her on the head. 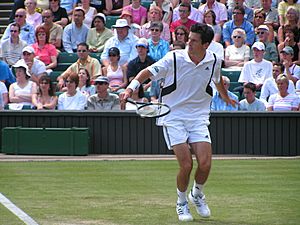 Tim Henman at Wimbledon in 2005

In 1998, he was ranked one of the ten best tennis players in the world. In the same year he also reached the Wimbledon semi-final. In 2001 he had a good year at Wimbledon beating Roger Federer in straight sets. He reached the semi final only to be beaten by eventual winner Goran Ivanišević. In 2004 he reached the semi finals of Roland Garros in France but lost to Guillermo Coria. Towards the end of his career Henman did not play so well. He ended up falling to 63 in the world rankings. In 2005 he was knocked out of the second round of Wimbledon by Roger Federer. He also had a lot of injuries at this time, including many at important points in matches.

Henman's last Wimbledon was a disappointment. He went out in the second round to Feliciano López of Spain. Shortly after he announced his retirement. He had a press conference on 23 August 2007 to make it official.

All content from Kiddle encyclopedia articles (including the article images and facts) can be freely used under Attribution-ShareAlike license, unless stated otherwise. Cite this article:
Tim Henman Facts for Kids. Kiddle Encyclopedia.