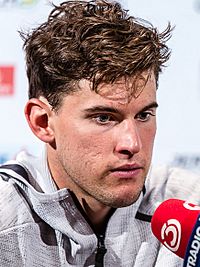 Dominic Thiem (born 3 September 1993) is an Austrian professional tennis player. His career-high ATP ranking is world No. 4, which he first reached on 6 November 2017. He is the second highest-ranked Austrian player in history, behind Thomas Muster (No. 1, 1996). He has won 16 ATP singles titles and reached three Grand Slam finals.

Thiem was born in Wiener Neustadt. He grew up in Lichtenwörth. He dated French tennis player Kristina Mladenovic from 2017 to 2019.

All content from Kiddle encyclopedia articles (including the article images and facts) can be freely used under Attribution-ShareAlike license, unless stated otherwise. Cite this article:
Dominic Thiem Facts for Kids. Kiddle Encyclopedia.