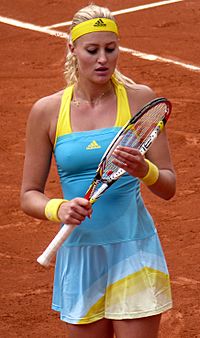 Mladenovic was born in Saint-Pol-sur-Mer. She is the child of Serbian parents. She dated Austrian tennis player Dominic Thiem from 2017 to 2019.

All content from Kiddle encyclopedia articles (including the article images and facts) can be freely used under Attribution-ShareAlike license, unless stated otherwise. Cite this article:
Kristina Mladenovic Facts for Kids. Kiddle Encyclopedia.