Sania Mirza (born 15 November 1986) is an Indian professional tennis player. A former world No. 1 in the doubles discipline, she has won six Grand Slam titles in her career. From 2003 until her retirement from singles in 2013, she was ranked by the WTA as India's No. 1 player in both the categories. Throughout her career, Mirza has established herself as by far the most successful Indian tennis player ever and one of the highest-paid and high-profile athletes in the country.

In her singles career, Mirza had notable wins over Svetlana Kuznetsova, Vera Zvonareva and Marion Bartoli; as well as former world No. 1s Martina Hingis, Dinara Safina, and Victoria Azarenka. She is the highest-ranked female player ever from India, peaking at world No. 27 in mid-2007; however, a major wrist injury forced her to give up her singles career and focus on the doubles circuit. She has achieved a number of firsts for women's tennis in her native country, including surpassing US$1 million in career earnings (in the end over $6.9 million), winning a singles WTA title, and winning six major titles (three each in women's doubles and in mixed doubles), as well as qualifying for (and eventually winning) the WTA Finals in 2014 alongside Cara Black, defending the title the following year partnering with Martina Hingis.

In addition, she is the third Indian woman in the Open Era to feature and win a round at a Grand Slam tournament, and the first to reach the second week. She has also won a total of 14 medals (including 6 gold) at three major multi-sport events, namely the Asian Games, the Commonwealth Games and the Afro-Asian Games.

Mirza was named one of the "50 Heroes of Asia" by Time in October 2005. In March 2010, The Economic Times named Mirza in the list of the "33 women who made India proud". She was appointed as the UN Women's Goodwill Ambassador for South Asia during the event held to mark the International Day To End Violence Against Women on 25 November 2013. She was named in Time magazine's 2016 list of the 100 most influential people in the world.

Mirza was born to Imran Mirza,a sports journalist and his wife Nasima in Mumbai, India. She was brought up in Hyderabad in a Muslim family. Mirza began playing tennis at the age of six, turning professional in 2003. She was trained by her father and other family members. She attended Nasr school in Hyderabad and later graduated from St. Mary's College.

Mirza married Pakistani cricketer Shoaib Malik on April 12, 2010. Mirza received an honorary degree of Doctor of Letters from the MGR Educational and Research Institute University in Chennai on 2008-12-11. Her niece, Sonia Baig Mirza, studies there.

In April 2003, Mirza made her debut in the India Fed Cup team, winning all three singles matches. She also won the 2003 Wimbledon Championships Girls' Doubles title, teaming up with Alisa Kleybanova of Russia.

In 2005, Mirza reached the third round of the Australian Open, losing to the champion Serena Williams. On February 12, 2005, she became the first Indian woman to win a WTA singles title, beating Alyona Bondarenko of Ukraine in the Hyderabad Open Finals. At the 2006 Doha Asian Games, Mirza won the silver in the women's singles category and the gold in the mixed doubles partnering Leander Paes. She was also part of the Indian women's team that won the silver in the team event.

In 2006, Mirza was awarded a Padma Shri, India's fourth highest honor for her achievements as a tennis player.

Mirza had had the best results of her career during the 2007 summer hardcourt season, finishing eighth in the 2007 U.S. Open Series standings. She reached the final of the Bank of the West Classic and won the doubles event with Shahar Pe'er, and reached the quarterfinals of the Tier 1 Acura Classic.

At the 2007 U.S. Open, she reached the third round before losing to Anna Chakvetadze for the third time in recent weeks. She fared much better in the doubles, reaching the quarterfinals in mixed with her partner Mahesh Bhupathi and the quarterfinals in the women's doubles with Bethanie Mattek, including a win over number two seeds Lisa Raymond and Samantha Stosur.

Mirza reached the quarter-finals at Hobart as No. 6 seed. She lost to Flavia Pennetta in three sets. She reached the third round at the Australian Open as No.31 seed, where she lost to No.8 seed Venus Williams 7-6(0) 6-4, having led 5-3 in the first set. She was runner-up in the Australian Open mixed doubles partnering Mahesh Bhupathi. Sun Tiantian and Nenad Zimonjić won the final 7–6(4), 6–4.

She withdrew from Pattaya City because of a left adductor strain.

Mirza reached the 4r at Indian Wells as No.21 seed, defeating No.9 seed Shahar Pe'er en route, but lost to No.5 seed Daniela Hantuchová.

At the 2008 Wimbledon Championships, as No.32 seed, Mirza was defeated by qualifier Maria Jose Martinez Sanchez, 6-0, 4-6, 9-7, having had several match points.

Mirza was eliminated in the first round of the 2008 Beijing Olympics when she retired in her match against Iveta Benešová because of a right wrist injury. Throughout 2008, Mirza was plagued by a slew of wrist injuries, requiring her to withdraw from several matches and the Roland Garros and US Open Grand Slams.

Mirza picked up her first Grand Slam title at the 2009 Australian Open. Partnered with Mahesh Bhupathi, she won the mixed doubles title beating Nathalie Dechy (France) and Andy Ram (Israel) 6-3, 6-1 in the final in Melbourne. She then entered the Pattaya Women's Open Tournament in Bangkok where she reached the finals after a string of good performances. She lost the finals to Vera Zvonareva 7-5, 6-1. She made the semis in doubles in the same tournament.

Mirza then competed in the BNP Paribas Open where she lost in the second round to Flavia Pennetta. She then participated in the Miami Masters and lost to Mathilde Johansson of France in the first round. Mirza and her doubles partner Chia-jung Chuang of Chinese Taipei made the semifinals of the doubles event. Mirza lost in the first round of the MPS Group Championships but won the doubles title with Chuang. She lost in the first round at Roland Garros, losing to Kazakhstan's Galina Voskoboeva. She also lost in the second round of the doubles (with Chuang) and mixed doubles (with Mahesh Bhupathi). She participated in the 2009 AEGON Classic and reached the semifinals, losing to Magdalena Rybarikova of Slovakia 3-6,6-0,6-3, who later won the title.

Mirza defeated Anna-Lena Gronefeld in the first round of the 2009 Wimbledon Championships. She then fell to #28 Sorana Cîrstea in the second round. She competed in and won the Lexington Challenger event, defeating top seed Julie Coin of France in the final. She also reached the final of the ITF event in Vancouver but lost to Stephanie Dubois of Canada. Playing in the U.S Open, she defeated Olga Govortsova in the first round but lost 6-0, 6-0 to 10th seed Flavia Pennetta of Italy. She also lost in the second round of the doubles event (partnering Francesca Schiavone) to Shahar Peer and Gisela Dulko.

Mirza successfully qualified for the Toray Pan Pacific Open in Tokyo but lost in the first round to Zheng Jie. Mirza won the first set but could not hold the lead, later losing to the Chinese player 7-5, 2-6, 3-6.

At Osaka, Mirza won her first round match against 5th seed Shahar Peer 3-6, 6-3, 6-4. Mirza then defeated Viktoriya Kutuzova 6-4, 6-3 and in the quarterfinal she defeated 2nd seed Marion Bartoli 6-4, 2-0 by retirement. Bartoli conceded her match and Mirza moved on to the semifinal to meet 4th seed Francesca Schiavone of Italy. 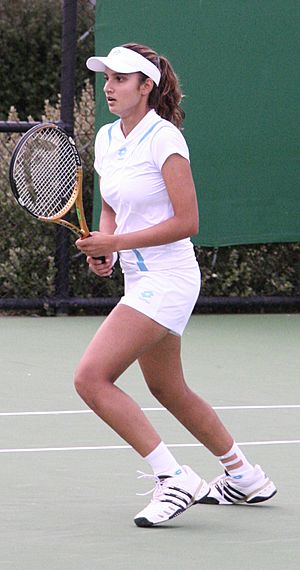 Sania Mirza at the 2007 Australian Open, during her first-round women's doubles match

All content from Kiddle encyclopedia articles (including the article images and facts) can be freely used under Attribution-ShareAlike license, unless stated otherwise. Cite this article:
Sania Mirza Facts for Kids. Kiddle Encyclopedia.