Mahesh Shrinivas Bhupathi (born 7 June 1974) is a retired Indian professional tennis player. In 1997, he became the first Indian to win a Grand Slam tournament (with Rika Hiraki). With his win at the Australian Open mixed doubles in 2006, he joined the elite group of eight tennis players who have achieved a career Grand Slam in mixed doubles. He is also the founder of International Premier Tennis League. In December 2016, Bhupathi was appointed as India's next non-playing Davis Cup captain and took over the reins from Anand Amritraj in February 2017.

Mahesh Bhupathi is considered one of the top doubles players of the 1990s and 2000s. In 1999, Bhupathi won three doubles titles with Leander Paes, including the French Open and Wimbledon. He and Paes became the first doubles team to reach the finals of all four Grand Slams, the first time such a feat has been achieved in the open era and the first time since 1952. On 26 April of that year, they became the world no. 1 doubles team. Bhupathi also won the US Open mixed doubles with Ai Sugiyama of Japan.

In 2006, Bhupathi teamed with Martina Hingis in the Australian Open mixed doubles competition. Entering the tournament unseeded and as wildcards, the first-time pair defeated four seeded opponents along the way, while only dropping a single set throughout. Bhupathi and Hingis defeated the sixth-seeded team of Daniel Nestor and Elena Likhovtseva in straight sets, 6–3, 6–3, to capture the championship. It was the sixth mixed doubles Grand Slam for Bhupathi, and the first one for Hingis. By winning the Australian Open, Bhupathi completed a career Grand Slam in mixed doubles.

In 2007, Bhupathi and Radek Štěpánek reached the 2007 Australian Open men's doubles event's quarterfinals. Bhupathi teamed with Štěpánek at the 2007 French Open to make the doubles semifinals, defeating two-year defending champions Jonas Björkman and Max Mirnyi in the quarterfinals. The team lost to the eventual champions Mark Knowles and Daniel Nestor. After Wimbledon, Bhupathi teamed with Pavel Vízner to win the 2007 Canada Masters, defeating the top-ranked doubles team Bob and Mike Bryan en route. After this victory, he won a tournament in New Haven with Nenad Zimonjić. At the 2007 US Open, he and Zimonjić paired in doubles. After the US Open, the team that beat Bhupathi and Štěpánek in the French Open semifinals, Knowles and Nestor, split up. Bhupathi became Knowles' partner, while Zimonjić became Nestor's, but back surgery meant he was out until the end of the year.

In 2009, Bhupathi and compatriot Sania Mirza won the mixed doubles title at the Australian Open, beating Nathalie Dechy and Andy Ram, 6–3, 6–1, in the final. The Indian pair thus made up for the disappointment of the previous year's final when they were beaten by Sun Tiantian and Nenad Zimonjić. With this win, Bhupathi's count in mixed doubles Grand Slam titles increased to seven.

Bhupathi broke up his partnership with Knowles and began playing once again with Max Mirnyi, with whom he played to win the 2002 US Open. In 2011, Bhupathi reunited with former playing partner Leander Paes for the 2011 Australian Open. The team reached the final, but lost 3–6, 4–6 to the Bryan brothers. On 7 June 2012, Bhupathi and Sania Mirza won the French Open mixed doubles. On 4 November 2012, Bhupathi and partner Rohan Bopanna won the Paris Masters cup. In spite of suffering a setback with their loss against Jonathan Marray and Frederik Nielsen in the ATP Tour Finals opener, the Indian duo reached the final round of the ATP Tour Finals, but suffered a defeat at the hands of Marcel Granollers and Marc López. 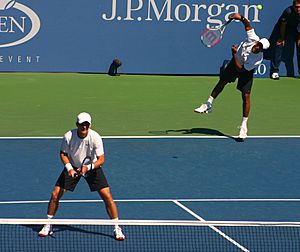 Bhupathi serves in his third-round match partnering Mark Knowles during the 2008 US Open.

Bhupathi and Bopanna played with different partners for the first three months of 2013, Bhupathi winning the tournament in Dubai in March with Michaël Llodra, but rejoined starting with the Monte-Carlo Masters.

Mahesh Bhupathi is known for his big serve. According to Nadal, his strong backhand makes him the best for an Ad Court player. Roger Federer acclaims him as one of the best players of all time. He often discusses strategies between the serves with his partner during the match and also communicates using finger-at-the-back signals.

Bhupathi appeared with Paes in six season finales. In 2011, they appeared, for the first time since 2002, after securing qualification in mid-October.

Bhupathi also qualified with Max Mirnyi in 2003, 2004, and 2010, when they finished runners-up to Daniel Nestor and Nenad Zimonjić.

In 2012, he and Rohan Bopanna made it to the final, where they lost to Marcel Granollers and Marc López.

By winning the 2006 Australian Open title, Bhupathi completed the mixed doubles Career Grand Slam. He became the eighth male player in history to achieve this.

Bhupathi has donned Indian colours numerous times for the Davis Cup as well as other international tournaments, including the Asian Games.

In 2006, Bhupathi won the doubles championship with Leander Paes at the Asian Games in Doha.

In 2001, he was awarded the Padma Shri, one of India's highest civilian awards. Bhupathi is an alumnus of the University of Mississippi in the United States. He is the founder of Globosport India private Limited which he started in 2002 as a sports and entertainment agency.

He married model Shvetha Jaishankar in 2002 but the couple got divorced in 2009 after seven years of marriage. He then married Miss Universe 2000 Lara Dutta in a civil ceremony on 16 February 2011 at Bandra, Mumbai. It was followed by a Christian ceremony on 20 February 2011 at Sunset Point in Goa.

On 1 August 2011, Dutta confirmed that she was pregnant with their first child. Their daughter Saira was born on 20 January 2012. In 2010, the couple started a film production company, Big Daddy Productions. 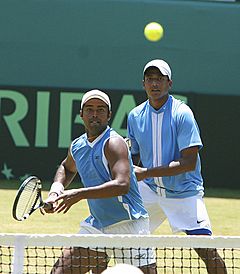 Bhupathi and Leander Paes partnered in the men's doubles event at the 2008 Summer Olympics in Beijing, but lost the quarterfinals, to Roger Federer and Stanislas Wawrinka of Switzerland, who went on to win the gold medal.

Paes and Bhupathi decided to team up again at the Australian Open 2011, ending a nine-year separation on the ATP circuit. They reached the finals of the event, but lost to American twins Bob and Mike Bryan. Paes stated at the time that the best thing has been to have their friendship back.

The Indian duo has a 303–103 career record together. They have a Davis Cup record of longest winning streak in doubles, with 23 straight wins.

Leander Paes wanted to play with Mahesh Bhupathi in the men's doubles event of the London Olympics, to be held July–August 2012. On 19 June 2012, the All India Tennis association relented to the demands of Bhupathi and Bopanna of not playing along Paes. Two teams were sent for the London Olympics- 2012, with Mahesh Bhupathi and Rohan Bopanna as one team and the other team consisting of Leander Paes and Vishnu Vardhan. Bhupathi also accused AITA of using Sania Mirza as bait for Leander's participation in the Olympics. When AITA relented to the wishes of Bhupathi and Bopanna and permitted them to play together, they lost in the second round to the unseeded French pairing of Richard Gasquet and Julien Benneteau.

The duo of Bhupathi and Paes has the longest doubles streak in Davis Cup history.

Bhupathi has also been involved in developing tennis facilities in India and, along with his company Globosport, has played a key rôle in developing and managing the careers of many Indian athletes, including Sania Mirza.

Mahesh Bhupathi announced the founding of the International Premier Tennis League on 25 May 2013, in Paris. The initial plan was to start the league with six charter franchises in Asia with the inaugural season commencing in November 2014. Bhupathi said the league would be modeled after the Indian Premier League, a cricket league in India. Justin Gimelstob said that the league would be star-driven as World Team Tennis was in the 1970s.

All content from Kiddle encyclopedia articles (including the article images and facts) can be freely used under Attribution-ShareAlike license, unless stated otherwise. Cite this article:
Mahesh Bhupathi Facts for Kids. Kiddle Encyclopedia.