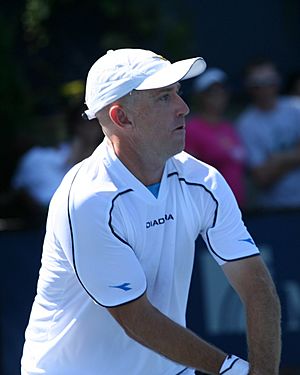 Kevin Ullyett (born May 23, 1972 in Harare) is a tennis player from Zimbabwe. His success on the tour has come playing doubles.

In his career, he has won 24 doubles titles, including the 2001 US Open and the 2005 Australian Open, both with Wayne Black.

Black, Ullyett's compatriot and long-time doubles partner, retired at the end of 2005. He now plays with Jonas Björkman.

All content from Kiddle encyclopedia articles (including the article images and facts) can be freely used under Attribution-ShareAlike license, unless stated otherwise. Cite this article:
Kevin Ullyett Facts for Kids. Kiddle Encyclopedia.