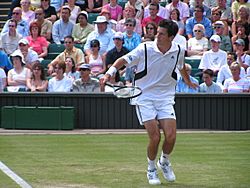 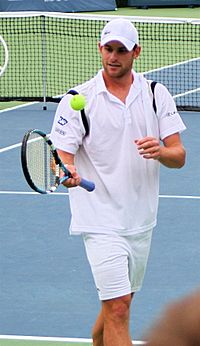 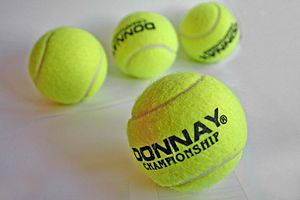 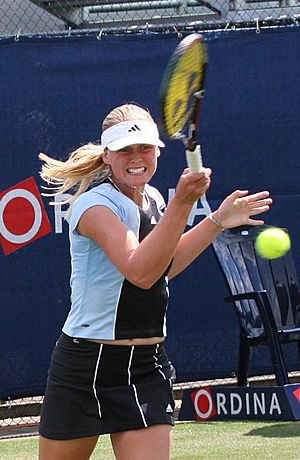 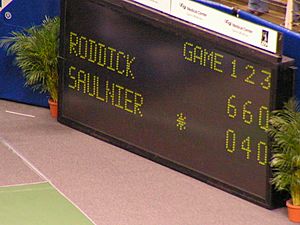 Tennis is a sport played with a felt-covered rubber ball, a tennis racket, and a court. Since 1998, every September 23 has been called "Tennis Day". Tennis’s official name is "lawn tennis".

First, early in the 11th century, players in France played a sport like this with their hands. It was called “Jeu de Paume”. In the 15th century the players played with rackets. Now it is called “tennis”. It became popular in England and France. King Henry III of France was a big fan of the game. This kind of sport is still played but is known as real tennis ("real" here meaning "royal"). The sport of "lawn tennis" played on grass courts was invented in mid 19th-century England and later spread into many other countries. The name of the sport is usually shortened to "tennis".

The dimensions of a tennis court 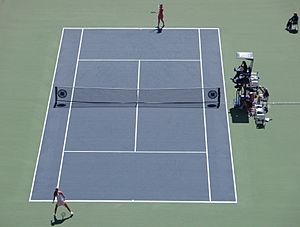 Two players before a serve

Tennis is played on a rectangular, flat surface. The court is 78 feet (23.77 m) long, and 27 feet (8.2 m) wide for singles matches and 36 ft (11 m) for doubles matches. Additional clear space around the court is required in order for players to reach overrun balls. A net is stretched across the full width of the court, parallel with the baselines, dividing it into two equal ends. It is held up by either a cord or metal cable of diameter no greater than 0.8 cm (1⁄3 in). The net is 3 feet 6 inches (1.07 m) high at the posts and 3 feet (0.91 m) high in the center. The net posts are 3 feet (0.91 m) outside the doubles court on each side or, for a singles net, 3 feet (0.91 m) outside the singles court on each side.

Tennis is unusual in that it is played on a variety of surfaces. Grass, clay, and hardcourts of concrete or asphalt topped with acrylic are the most common. Occasionally carpet is used for indoor play, with hardwood flooring having been historically used. Artificial turf courts can also be found.

The line dividing the service line in two is called the center line or center service line. The boxes this center line creates are called the service boxes; depending on a player's position, they have to hit the ball into one of these when serving. A ball is out only if none of it has hit the area inside the lines, or the line, upon its first bounce. All lines are required to be between 1 and 2 inches (25 and 51 mm) in width, with the exception of the baseline which can be up to 4 inches (100 mm) wide, although in practice it is often the same width as the others.

Tennis is now a sport that is played at the Olympics. They also have big tournaments like the U.S. Open, Australian Open, French Open and Wimbledon. These four are known as Grand Slam events.