A racket is a sports implement consisting of a handled frame with an open hoop across which a network of strings or catgut is stretched tightly. It is used for striking a ball or shuttlecock in games such as squash, tennis, racquetball, and badminton. Collectively, these games are known as racket sports. This predecessor to the modern game of squash, rackets, is played with 30 1⁄2-inch-long (77 cm) wooden rackets. While squash equipment has evolved in the intervening century, rackets equipment has changed little.

The frame of rackets for all sports was traditionally made of laminated wood and the strings of animal intestine known as catgut. The traditional racket size was limited by the strength and weight of the wooden frame which had to be strong enough to hold the strings and stiff enough to hit the ball or shuttle. Manufacturers started adding non-wood laminates to wood rackets to improve stiffness. Non-wood rackets were made first of steel, then of aluminium, and then carbon fiber composites. Wood is still used for real tennis, rackets, and xare. Most rackets are now made of composite materials including carbon fibre or fiberglass, metals such as titanium alloys, or ceramics.

Cat gut has partially been replaced by synthetic materials including nylon, polyamide, and other polymers. Rackets are restrung when necessary, which may be after every match for a professional or never for a social player.

Racket is the standard spelling of the word. Racquet is an alternative spelling used more commonly in certain sports (squash, racquetball, badminton) and less commonly in others (tennis). Racket is the preferred spelling in tennis. While some writers, especially those outside North America, prefer the French-influenced racquet, racket is the predominant spelling by a large margin. Similarly, while some believe that racket came about as a misspelling of racquet, racket is in fact the older spelling: it has been in use since the 16th century, with racquet only showing up later in the 19th century as a variant of racket.

The origin of the term "racket" is unclear. According to a popular belief first published by Malcolm Whitman in 1932, the expression comes from the Arabic term rahat al-yad, meaning "palm of hand". Modern research however reveals this thesis in a highly questionable light. Instead, the term is more likely to be derived from the Flemish word "raketsen" which is itself derived from Middle French "rachasser", meaning "to strike (the ball) back". 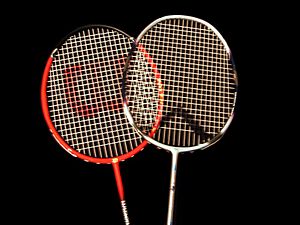 Badminton rackets are light, with top quality rackets weighing between about 80 and 100 grams (with strings). Modern rackets are composed of carbon fibre composite (graphite reinforced plastic), which may be augmented by a variety of materials. Carbon fibre has an excellent strength to weight ratio, is stiff, and gives excellent kinetic energy transfer. Before the adoption of carbon fibre composite, rackets were made of wood to their excessive weight and cost.

There is a wide variety of racket designs, although the racket size and shape are limited by the Laws. Different rackets have playing characteristics that appeal to different players. The traditional square head shape is still available, but an isometric head shape is increasingly common in new rackets.

This predecessor to the modern game of squash, rackets, is played with 30 1⁄2-inch (770 mm) wooden rackets. While squash equipment has evolved in the intervening century, rackets equipment has changed little.

Racquetball rackets, unlike many other types, generally have little or no neck, the grip connecting directly to the head. They also tend to have head shapes that are notably wider at the top, with some older rackets looking almost triangular or teardrop shaped. 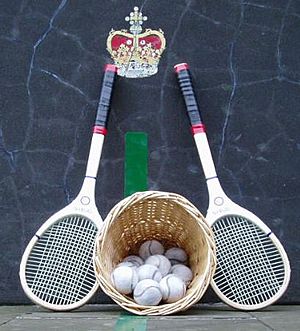 In real tennis, 27-inch (686-mm) long rackets are made of wood and very tight strings to cope with the game's heavy balls. The racket heads are bent slightly to make striking balls close to the floor or in corners easier.

Standard squash rackets are governed by the rules of the game. Traditionally they were made of laminated timber (typically Ash), with a small strung area using natural gut strings. After a rule change in the mid-1980s, they are now almost always made of composite materials such as carbon fiber or metals (graphite, Kevlar, titanium, and/or boron) with synthetic strings. Modern rackets are 70 cm long, with a maximum strung area of 500 square centimetres (approximately 75 square inches) and a mass between 90 and 200 grams (4–7 ounces). 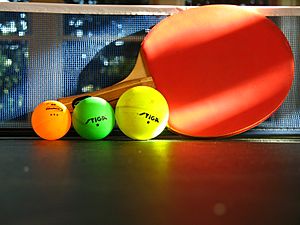 Table Tennis racket with 3 different sizes of the celluloid ball

Table tennis uses a table tennis racket made from laminated wood covered with rubber on one or two sides depending on the grip of the player. Unlike a conventional racket, it does not contain strings strung across an open frame. This is called either a paddle, racket, or a bat, with usage differing by region. In the USA the term "paddle" is common, in Europe the term is "bat", and the official ITTF term is "racket." 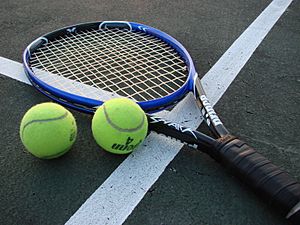 The parts of a tennis racket are the head, rim, face, neck, butt/butt cap, handle and strings.

Modern tennis rackets vary in length, weight, and head size. 21 to 26 inches (53 to 66 cm) is normally a junior's length, while 27 and 27.5 inches (69 and 70 cm) are for stronger and taller adult players. Some are also available at lengths of 28 to 29 inches (71 to 74 cm). Weights of a racket also vary between 8 ounces (230 g) unstrung and 12.5 ounces (350 g) strung. Rackets originally flared outward at the bottom of the handle to prevent slipping. The rounded bottom was called a bark bottom after its inventor Matthew Barker. But by 1947, this style became superfluous. Head size also plays a role in a racket's qualities. A larger head size generally means more power and a larger "sweet spot" that is more forgiving on off-center hits. A smaller head size offers more precise control. Current racket head sizes vary between 85–137 square inches (550–880 cm2), with most players adopting one from 95–105 square inches (610–680 cm2). Rackets that are mid way in weight, size and player ability, are often called "tweener rackets." 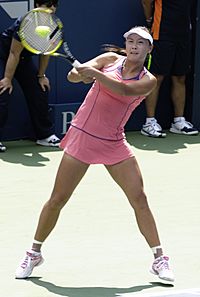 One of the ways a tennis racket can be held.

Vibration dampers (also commonly known as "gummies") may be interlaced in the proximal part of the string array for improved feel.

Throughout most of tennis' history, rackets were made of laminated wood, with heads of around 65 square inches (420 cm2). In the late 1960s, Wilson produced the T2000 steel racket with wire wound around the frame to make string loops. It was popularized by the top American player Jimmy Connors. In 1968 Spalding launched an aluminum racket, called The Smasher. Aluminium, though lighter and more flexible than steel, was less accurate than wood. Because of this, most of the top players still preferred to use wooden frames, and a decade later they were still in use.

In the early 1980s, "graphite" (carbon fibre) composites were introduced, and other materials were added to the composite, including ceramics, glass-fibre, boron, and titanium. The Dunlop Max200G used by John McEnroe from 1983 was an early graphite racket, along with the very popular Prince original graphite. Composite rackets are the contemporary standard, the last wooden racquet appeared at Wimbledon in 1987.

Longer rackets were introduced by Dunlop to give additional reach for shots such as the serve and volley where shorter players may be at a disadvantage. Mid-size or mid-plus rackets are the general standard for professional players. 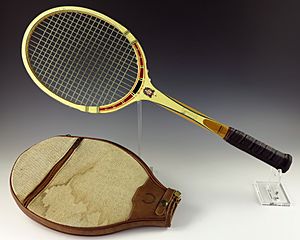 A United States tennis racket from the 1970s

Stringing (material, pattern, tension) is an important factor in the performance of a tennis racket. A few elite players use natural gut, but the vast majority of strings are a nylon or polyester synthetic. Some (American champion Pete Sampras is a prominent example) consider the natural string to be more responsive, providing a better "feel", but synthetic is favored for its much superior durability, consistency, as well as much lower cost. String pattern (the vertical/horizontal grid) is a function of the racket head size and design. A tighter pattern is considered to deliver more precise control; a more "open" pattern to offer greater potential for power and spin. Modern rackets are marked with a recommended string tension range. The basic rule is that a lower tension creates more power (from a "trampoline" effect) and a higher string tension creates more control (the less 'trampoline effect' the more predictable the power and angle of the departure from the string bed.)

All content from Kiddle encyclopedia articles (including the article images and facts) can be freely used under Attribution-ShareAlike license, unless stated otherwise. Cite this article:
Racquet Facts for Kids. Kiddle Encyclopedia.