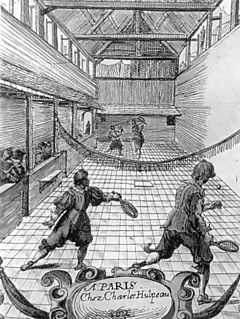 Real tennis is the original racket sport from which the modern game of lawn tennis, or tennis, developed. It is also known as jeu de paume in France and as "court tennis" in some parts of United States.

Real tennis is still played at a small number of active courts in the United Kingdom, Australia, the United States, and France. The sport is supported and governed by organizations around the world.

All content from Kiddle encyclopedia articles (including the article images and facts) can be freely used under Attribution-ShareAlike license, unless stated otherwise. Cite this article:
Real tennis Facts for Kids. Kiddle Encyclopedia.