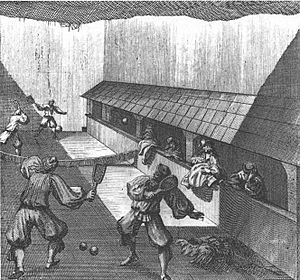 Jeu de paume is a ball-and-court game that originated in France. It was an indoor precursor of tennis played without racquets, though these were eventually introduced. It is a former Olympic sport, and has the oldest ongoing annual world championship in sport, first established over 250 years ago. Originally spelled jeu de paulme, now it is called "real tennis" , court tennis (US) or courte paume (France).

In the earliest versions of the game, the players hit the ball with their hands, as in palla, volleyball, or certain varieties of pelota. Jeu de paume, or jeu de paulme as it was formerly spelled, literally means "palm game". In time, gloves replaced bare hands.

Even when paddle-like bats, and finally racquets, became standard equipment for the game by the late 17th century, the name did not change. It became known as "tennis" in English (see History of tennis), and later "real tennis" after the derived game of lawn tennis became the more widely known sport.

The term is used in France today to denote the game of tennis on a court in which the ancient or modern game might be played. The indoor version is sometimes called jeu de courte paume or just courte paume ("short palm") to distinguish it from the outdoor version, longue paume ("long palm"), played on a field of variable length.

Since 1740, jeu de paume has been the subject of an amateur world championship, held each year in September. It is the oldest active trophy in international sport. 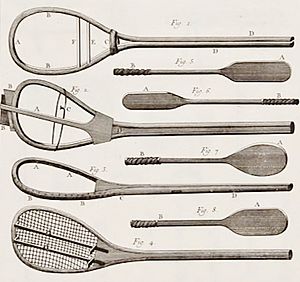 All content from Kiddle encyclopedia articles (including the article images and facts) can be freely used under Attribution-ShareAlike license, unless stated otherwise. Cite this article:
Jeu de paume Facts for Kids. Kiddle Encyclopedia.