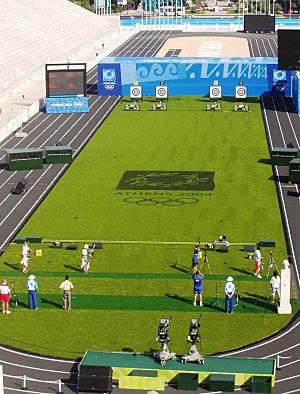 Archery competition held during the Athens 2004 Summer Olympics. Dropped from the Olympic program after the 1920 Antwerp games, it was reinstated in 1972.

Olympic sports are contested in the Summer Olympic Games and Winter Olympic Games. The 2016 Summer Olympics included 28 sports, with five additional sports due to be added to the 2020 Summer Olympics program; the 2014 Winter Olympics included seven sports. The number and types of events may change slightly from one Olympiad to another. Each Olympic sport is represented by an international governing body, namely an International Federation (IF). The International Olympic Committee (IOC) establishes a hierarchy of sports, disciplines, and events. According to this hierarchy, each Olympic sport can be subdivided into multiple disciplines, which are often mistaken as distinct sports. Examples include swimming and water polo, which are in fact disciplines of the sport of aquatics (represented by the International Swimming Federation), and figure skating and speed skating, which are both disciplines of the sport of ice skating (represented by the International Skating Union). In turn, disciplines are subdivided into events, for which Olympic medals are awarded. A sport or discipline is included in the Olympic program if the IOC determines it to be widely practiced around the world, that is, the popularity of a given sport or discipline is indicated by the number of countries that compete in it. The IOC's requirements also reflect participation in the Olympic Games – more stringent conditions are applied to men's sports/disciplines (as men are represented at the Games in higher numbers than women) and to summer sports/disciplines (as more nations compete in the Summer Olympics than in the Winter Olympics). 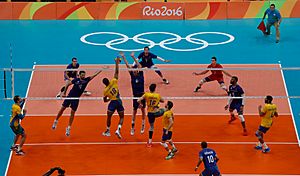 Volleyball has been part of the Summer Olympics since 1964.

In order for a sport or discipline to be considered for inclusion in the list of Summer Olympics sports, it must be widely practiced in at least 75 countries, spread over four continents.

The following sports (or disciplines of a sport) make up the current and discontinued Summer Olympic Games official program and are listed alphabetically according to the name used by the IOC. The discontinued sports were previously part of the Summer Olympic Games program as official sports, but are no longer on the current program. The figures in each cell indicate the number of events for each sport contested at the respective Games; a bullet (•) denotes that the sport was contested as a demonstration sport.

Eight of the 34 sports consist of multiple disciplines. Disciplines from the same sport are grouped under the same color:

The following sports or disciplines have been demonstrated at the Summer Olympic Games for the years shown, but have never been included on the official Olympic program:

Gliding was promoted from demonstration sport to an official Olympic sport in 1936 in time for the 1940 Summer Olympics, but the Games were cancelled due to the outbreak of World War II.

Tenpin bowling, demonstrated separately from the Olympics in 1936 in Germany (alongside forms of ninepin bowling), but part of the demonstration sports at Seoul in 1988, has been a regular medal sport of the World Games since 1981 and the Pan American Games since 1991.

The current categories, as of 2013, are as follows, with the pre-2013 categorizations also being available. Category A represents the most popular sports; category E lists either the sports that are the least popular or that are new to the Olympics (golf and rugby). 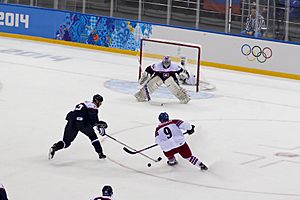 Ice hockey was first introduced at the 1920 Summer Olympics and later transferred to the Winter Games in 1924.

Before 1924, when the first Winter Olympic Games were celebrated, sports held on ice, like figure skating and ice hockey, were held at the Summer Olympics. These two sports made their debuts at the 1908 and the 1920 Summer Olympics, respectively, but were permanently integrated in the Winter Olympics program as of the first edition. The International Winter Sports Week, later dubbed the I Olympic Winter Games and retroactively recognized as such by the IOC, consisted of nine sports. The number of sports contested at the Winter Olympics has since been decreased to seven, comprising a total of fifteen disciplines.

A sport or discipline must be widely practiced in at least 25 countries on three continents in order to be included on the Winter Olympics program.

The following sports (or disciplines of a sport) make up the current Winter Olympic Games official program and are listed alphabetically, according to the name used by the IOC. The figures in each cell indicate the number of events for each sport that were contested at the respective Games (the red cells indicate that those sports were held at the Summer Games); a bullet (•) denotes that the sport was contested as a demonstration sport. On some occasions, both official medal events and demonstration events were contested in the same sport at the same Games.

Three out of the seven sports consist of multiple disciplines. Disciplines from the same sport are grouped under the same color:

The following sports have been demonstrated at the Winter Olympic Games for the years shown, but have never been included on the official Olympic program:

Ice climbing was showcased at the Sochi Winter Olympics in 2014, was on the non-competition program at the 2016 Winter Youth Olympic Games, and aims to become an official competition sport. Ski ballet was a demonstration event under the scope of freestyle skiing. Disabled sports are now part of the Winter Paralympic Games. 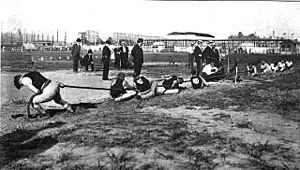 Tug of war was contested at the 1904 Summer Olympics. It was later dropped from the Olympic program but remains a recognized sport.

Many sports are not recognized as Olympic sports although their governing bodies are recognized by the IOC. Such sports, if eligible under the terms of the Olympic Charter, may apply for inclusion in the program of future Games, through a recommendation by the IOC Olympic Programme Commission, followed by a decision of the IOC Executive Board and a vote of the IOC Session.

The governing bodies of the following sports, though not contested in the Olympic Games, are recognized by the IOC:

1 Official sport at the World Games
2 Discontinued Olympic sport
3 Ineligible to be included because the Olympic Charter bans sports with motorization elements
4 The governing bodies for baseball and softball merged into a single international federation in 2013.
5 Included at the 2020 Summer Olympics
6 Skateboarding, now a discipline within roller sports, is Included at the 2020 Summer Olympics.

All content from Kiddle encyclopedia articles (including the article images and facts) can be freely used under Attribution-ShareAlike license, unless stated otherwise. Cite this article:
Olympic sports Facts for Kids. Kiddle Encyclopedia.