William Tatem Tilden II (February 10, 1893 – June 5, 1953), nicknamed "Big Bill," was an American male tennis player. He is often considered one of the greatest tennis players of all time. Tilden was the World No. 1 player for six years from 1920 through 1925. He won 15 Major singles titles including ten Grand Slam events, one World Hard Court Championships and four professional majors. He was the first American to win Wimbledon in 1920. He also won a record seven U.S. Championships titles (shared with Richard Sears and Bill Larned).

Tilden dominated the world of international tennis in the first half of the 1920s, and during his 18-year amateur period of 1912–29, won 138 of 192 tournaments. He owns a number of all-time tennis achievements including a career match winning record and a career winning percentage at the U.S. National Championships. At the 1929 U.S. National Championships Tilden became the first player to reach 10 finals at a single Grand Slam event. His ten finals at a grand slam tournament remained a record until 2017, when Roger Federer reached his eleventh Wimbledon final. Tilden, who was frequently at odds with the rigid United States Lawn Tennis Association about his amateur status and income derived from newspaper articles, won his last Major title in 1930 at Wimbledon aged 37. He turned professional on the last day of that year and toured with a handful of other professionals for the next 15 years. 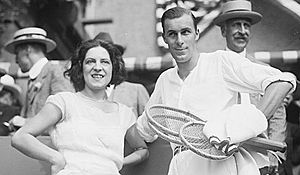 Tilden went to the prep school Germantown Academy where he wasn't known for his tennis nor was he eventually good enough to play on his college team. The shy, self-absorbed, sometimes arrogant young man dropped out of the University of Pennsylvania and in 1910 began to practice his game against a backboard, and he also became a dedicated student of the game. The following year he won his first tournaments; the junior singles and doubles title of Germantown. He later enrolled at the Peirce School of Business. In just three years, he worked his way up the ranks. His first national title was winning the mixed doubles championships with Mary Browne in 1913 and they successfully defended the title in 1914.

From 1914 to 1917, Tilden won the Philadelphia championship. Prior to 1920, he had won a number of Canadian doubles titles, but at the U.S. National Championships in 1918 and 1919 he lost the singles final to Robert Lindley Murray and "Little Bill" Johnston, respectively in straight sets. He won six consecutive U.S. singles championships from 1920–1925 and seven in total, making him the co-record holder with Richard Sears and Bill Larned. In the winter of 1919–20, he moved to Rhode Island where, on an indoor court, he devoted himself to remodeling his relatively ineffective backhand into a much more effective one. With this change, he became the world no. 1 tennis player and the first male American to win the Wimbledon singles championship. In the mid-1920's, Tilden came into conflict with the USLTA regarding alleged violations of the amateur rule, specifically relating to the monetary compensation he received for writing tennis articles.

In the late 1920s, the great French players known as the "Four Musketeers" finally wrested the Davis Cup away from Tilden and the United States, as well as his domination of the singles titles at Wimbledon and Forest Hills. Tilden had long been at odds with the rigid amateur directors of the United States Lawn Tennis Association about his income derived from newspaper articles about tennis. He won his last major championship at Wimbledon in 1930 at the age of 37, but was no longer able to win titles at will. 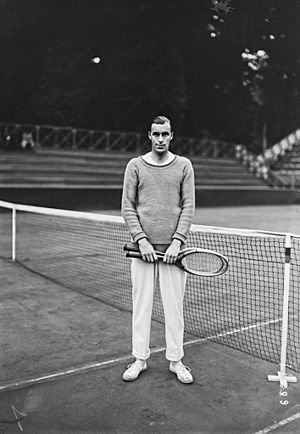 Bill Tilden at the 1921 World Hard Court Championships in Paris.

On 31 December 1930, in need of money, he turned professional and joined the fledgling pro tour, which had begun only in 1927. For the next 15 years, he and a handful of other professionals such as Hans Nüsslein and Karel Koželuh barnstormed across the United States and Europe in a series of one-night stands, with Tilden still the player that people primarily paid to see. Even with greats such as Ellsworth Vines, Fred Perry, and Don Budge as his opponents, all of them current or recent world no. 1 players, it was often Tilden who ensured the box-office receipts—and who could still hold his own against the much younger players for a first set or even an occasional match.

Tilden thought he reached the apogee of his whole career in 1934 at 41 years old; nevertheless, that year he was dominated in the pro ranks by Ellsworth Vines. American Lawn Tennis reported that Vines had an edge of 11–9 in the first phase of their tour from January 10 through February 16 and that Vines led Tilden by 19 matches after the second phase of their tour, played from March 21 through May 17. Tilden had won 17 times for the entire year, per an Associated Press report, so a probable win-loss record at tour's end was 36–17 in Vines' favor. Both players then met at least 6 times during the rest of the year (Ray Bowers has listed 5 tournament matches and 1 one-night program), all lost by Tilden.

In 1945, the 52-year-old Tilden and his long-time doubles partner Vinnie Richards won the professional doubles championship—they had won the United States amateur title 27 years earlier in 1918.

Tilden coached Germany's tennis team in the 1937 Davis Cup. In the inter-zone finals, the U.S. team won after the deciding singles clash between Gottfried von Cramm and Don Budge, a match which has been called "The Greatest Tennis Match Ever Played".

Tilden had been born to wealth, and earned large sums of money during his long career, particularly in his early years on the pro tour, he spent it lavishly, keeping a suite at the Algonquin Hotel in New York City. Much of his income went towards financing Broadway shows that he wrote, produced, and starred in.

The last part of his life was spent quietly and away from his family, occasionally participating in celebrity tennis matches.

He died in his apartment at 2025 North Argyle in Los Angeles, California. He was preparing to leave for the United States Professional Championship tournament in Cleveland, Ohio, in 1953 when he died from heart complications at age 60. Tilden is buried in Ivy Hill Cemetery in Philadelphia.

Tilden was inducted into the International Tennis Hall of Fame in Newport, Rhode Island, in 1959.

All content from Kiddle encyclopedia articles (including the article images and facts) can be freely used under Attribution-ShareAlike license, unless stated otherwise. Cite this article:
Bill Tilden Facts for Kids. Kiddle Encyclopedia.