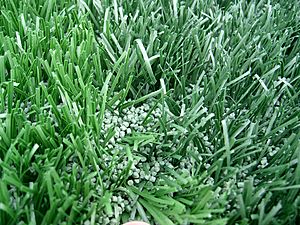 Artificial turf, or synthetic turf, is a man-made (something made by humans) surface made from synthetic materials, made to look like natural grass. It is most often used in arenas for sports that are normally played on grass. However, it is also used on lawns and in commercial applications. The main advantage of artificial turf is low cost of maintenance as there is no need to water it and trim it. Disadvantages include toxicity, limited lifetime, and the requirement for cleaning. Artificial turf is extremely popular in sporting industry - especially in US and regions where weather or heavy use makes it difficult to sustain high quality live turf.

Artificial grass was first used in 1966 when it was installed in the Houston Astrodome, the world’s first domed indoor multipurpose sports stadium. During the stadium’s inaugural season in 1965 its real grass failed to grow. By the second half of the season the field conditions were so bad that they installed artificial grass, called "Astroturf".

There are several environmental concerns associated with artificial turf including loss of wildlife habitat, contaminated runoff, and migration of synthetic materials. Contaminants that are harmful to aquatic life, such as zinc, have been found in storm water runoff from artificial turf. Both infill particles and broken synthetic grass fibers can migrate away from yards or playing fields, contributing to microplastic pollution.

All content from Kiddle encyclopedia articles (including the article images and facts) can be freely used under Attribution-ShareAlike license, unless stated otherwise. Cite this article:
Artificial turf Facts for Kids. Kiddle Encyclopedia.