Edgbaston is a suburban area of Central Birmingham, England. It is curved around the southwest of the city centre. It is bordered by Moseley to the south east and by Smethwick and Winson Green to the north west.

In the 19th century, the area was under the control of the Gough-Calthorpe family who refused to allow factories or warehouses to be built in Edgbaston, thus making it attractive for the middle class. Edgbaston is home to the University of Birmingham, established as Birmingham Medical School in 1825. Edgbaston traditionally has a reputation for being one of the most upmarket and affluent parts of Birmingham or "where the trees begin".

The parliamentary constituency of Edgbaston includes the smaller Edgbaston ward and the wards of Bartley Green, Harborne and Quinton. Edgbaston is also a local government district, managed by its own district committee.

Edgbaston means "village of a man called Ecgbald", from the Old English personal name + tun "farm". The personal name Ecgbald means "bold sword" (literally "bold edge"). The name was recorded as a village known as Celboldistane in the Hundred of Coleshill in the 1086 Domesday Book until at least 1139, wrongly suggesting that Old English stān "stone, rock" is the final element of the name. 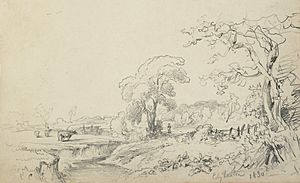 Cattle graze in Edgbaston in 1830

The United Kingdom Census 2001 found that 20,749 people were living in the Birmingham City Council ward of Edgbaston, in 8,666 households. This produced an average of 2.4 people per household, slightly below the city-wide average of 2.5. The ward, which has an area of 871.6ha, had a population density of 23.8 people per hectare. Like the city of Birmingham, Edgbaston had a slightly higher proportion of females, at 50.1%, to males. 27.1% of the population was in the 25-44 age bracket and 15.1% were aged between 45-59. At 14.8%, Edgbaston had a lower proportion of people of a pensionable age than the rest of Birmingham (16.7%). It also had a lower proportion of people of working age at 73.8%, although it was above the national percentage of 61.5%.

Edgbaston has a slightly above average percentage for ethnic minorities with ethnic minorities representing 31.8% of the population as opposed to 29.6% for Birmingham. The largest ethnic minority group was the British Asian group at 16.1%. 25.6% of people were born outside of the United Kingdom, above the Birmingham figure of 16.5%. Christianity was the most predominant religion, with 52.5% of the population stating that they were Christians, compared with 59.1% for Birmingham. 8.0% stated that they were Muslims, below the Birmingham figure of 14.3%. Edgbaston was home to a significant Orthodox Jewish community. 19.1% of the Edgbaston population stated that they had no religion.

46.4% of households were owner-occupied, below the Birmingham figure of 60.4%. 19.3% were rented privately, 15.2% were rented from a housing association and 11.6% were rented from Birmingham City Council. There was a total number of 9,191 houses in Edgbaston, 525 of which were vacant. At 45.6%, the largest proportion of houses in Edgbaston were purpose-built blocks of flats. This is much higher than the city average of 17.9%. Detached houses were the second most common housing type in the ward at 19.7%.

Edgbaston had an unemployment rate of 8.1%, below the city average of 9.5% although above the national average of 5%. 13.4% of the population stated themselves as students. Of the unemployed, 42% were in long term unemployment and 15.6% had never worked. At 24.6%, the majority of the population worked in finance, real estate, and business activities. The largest employer in the area was the Heart of Birmingham Primary Care Trust, employing 10,000 people.

The Edgbaston Parliamentary Constituency has a much higher population. 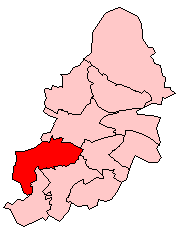 The Church of England parish churches are St Augustine's Church, St Germain's Church, St. George's Church and St. Bartholomew's Church, also known as Edgbaston Old Church. Birmingham Central Synagogue built in 1961 is also in Edgbaston. The Roman Catholic church of the Birmingham Oratory, on Hagley Road, was built in 1907 in the Baroque style as a memorial to John Henry Newman, who founded the English Oratory here. Its dome is a prominent landmark.

J. R. R. Tolkien lived in Edgbaston during his teenage years, and the two towers of Edgbaston, Perrott's Folly and the Waterworks Tower, both close to the Oratory, are said to have provided inspiration for part of his The Lord of the Rings novel. The Barber Institute of Fine Arts, which is located on the University of Birmingham campus, is a purpose built gallery which contains a wide range of art from the masters to Picasso.

Edgbaston Reservoir, formerly known as Rotton Park Reservoir, provides a header supply for the Birmingham Canal Navigations and is an important inner city leisure amenity. There are three public gardens located within Edgbaston; the Birmingham Botanical Gardens and the lesser known University of Birmingham Winterbourne Botanic Garden and Martineau Gardens. Adjoining the university gardens is Edgbaston Pool (not to be confused with the reservoir) which is a Site of Special Scientific Interest. Deer's Leap Wood is a Site of Local Importance for Nature Conservation in the former Mitchells & Butlers (brewery) land in North Edgbaston. Edgbaston contains the only Grade I listed domestic building in Birmingham, notably one of the Arts & Crafts houses number 21 Yateley Road, designed by Herbert Tudor Buckland, and built for his own use. Edgbaston Hall, a Grade II listed country hall, is located within the ward. It is currently the clubhouse for Edgbaston Golf Club.

The BBC opened television studios at Pebble Mill in 1971, which were in use for 33 years until closing in October 2004 and being demolished the following year. The site remains vacant, despite plans upon its closure for a science and technology park to be developed there.

Two railway stations serve the area. The first, University station, is found in south Edgbaston, west of Birmingham University. The second is Five Ways railway station in the north of the ward on the city's Middle Ring Road. Both stations are on the Cross-City Line. Between these two stations used to be another; Somerset Road station. However, this was closed and demolished some years ago.

The A38 road (Bristol Road) runs through the ward and is one of the main traffic arteries of the city reaching out to the south west of the city and beyond from the city centre and New Street. Along this route buses frequently stop. There are several other bus routes throughout. The Worcester and Birmingham Canal passes through the area, connecting the city centre with the River Severn at Worcester. This was constructed and opened in the 1790s and is used mainly for leisure and recreational purposes as opposed to its originally intended industrial usage.

The A456 road (Hagley Road) runs through the north of Edgbaston and gives a relatively swift link with the city centre as well as faraway places including Halesowen, Kidderminster and Hereford.

The nearest public libraries to the area are in Harborne, Selly Oak and Balsall Heath, whilst the University of Birmingham main library (which members of the public can join for a fee) is in the area. There are a number medical facilities in the area, with two of the most well known being the University Medical Centre and the Calthorpe clinic. Two hospitals are nearby, the Queen Elizabeth Hospital and Selly Oak Hospital.

Edgbaston tram stop is projected as the Midland Metro system is extended.

All content from Kiddle encyclopedia articles (including the article images and facts) can be freely used under Attribution-ShareAlike license, unless stated otherwise. Cite this article:
Edgbaston Facts for Kids. Kiddle Encyclopedia.