Winterbourne Botanic Garden is the botanic garden of the University of Birmingham, located in Edgbaston, Birmingham. It is adjacent to Edgbaston Pool, a Site of Special Scientific Interest.

Set in 7 acres (28,000 m2), it is notable as a rare surviving example of an early 20th-century high status suburban "villa" garden, inspired by the Arts and Crafts movement of the Edwardian period. Both Winterbourne Botanic Garden and Winterbourne House are owned by the University of Birmingham and are open to the public as a heritage attraction. The site is also part of the University conference park.

The house and garden have interactive exhibits and a terraced tearoom. There is a gift shop, plant sales, second hand books for sale and a gallery with a programme of guest exhibitions. Winterbourne is open daily for a small charge with hours varying between summer and winter. Staff and students at the University of Birmingham are entitled to free entry. It is also part of the Historic Houses Association and the Royal Horticultural Society

Winterbourne House and Garden were designed in 1903 as a family home for John and Margaret Nettlefold. John Nettlefold commissioned local architect Joseph Lancaster Ball to design and build the house, which was finished in 1904. The house was made of brick and tile and has an intentionally wavy roof line. Margaret Nettlefold designed the original garden herself. The influence of designer Gertrude Jekyll can be seen in the colour-themed border planting. 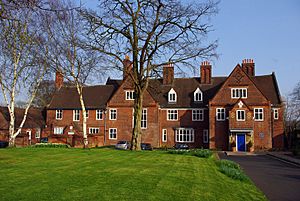 A view of the front of Winterbourne House.

The Nettlefolds lived in the house with their children until John Nettlefold's health meant he had to move away. In 1919, Margaret Nettlefold sold Winterbourne and moved away to be closer to her husband. The property was then bought by the Wheelock family, who had 9 children. Wheelock was a local lawyer. The Wheelocks stayed at Winterbourne until 1925, when it was purchased by John Nicolson, a successful local businessman. Nicolson was a keen gardener and made several improvements to the garden at Winterbourne, including expanding the rock garden and adding an alpine area. Nicolson remained at the house until his death in 1944 and Winterbourne was bequeathed to the University. The house and garden remain a part of the University.

The University of Birmingham has made varied use of the building since 1944 but in 2010 it was restored to its former glory as a family home (complete with William Morris design wallpapers). The garden had already undergone a period of restoration. The house and garden are now open as a visitor attraction and the garden is grade II listed.

Between 2008 and 2011, a section of the site was used by Toby Buckland and the BBC TV's Gardener's World series.

The garden contains many plants from across the world. Highlights include an NCCPG collection of Anthemis, an orchid house, alpine garden, arid house, geographic beds and a hazel (Corylus) tunnel. Other features of the garden include a restored wooden pergola, sunken rock garden, and a lean-to glasshouse that is notable for having been built on a slant. In 2011 a pleached lime walk was planted to reinstate one that was part of the original garden.

The design of the house was intended to make the best use of available light; notable features are its large windows, white painted panelling and south facing rooms. The house contains furniture dating from the late Victorian period to the 1920s. Restored rooms include a drawing room, study, bedrooms and nursery. The visitor tearoom is located where the original dining room would have been.

All content from Kiddle encyclopedia articles (including the article images and facts) can be freely used under Attribution-ShareAlike license, unless stated otherwise. Cite this article:
Winterbourne Botanic Garden Facts for Kids. Kiddle Encyclopedia.